At Apple’s Worldwide Developer’s Conference (WWDC) yesterday they revealed the brand new redesign for Apple Music that makes it easier to use, and to look at.

Apple was rumoured to be unveiling a big update to the look of their music streaming service Apple Music at this year’s WWDC and yesterday those rumours came true. The update improves upon the original design, retaining the navigation tabs at the bottom, and adds some new features that might threaten Spotify.

The tabs at the bottom remain familiar with ‘Library’, ‘For You’, ‘Browse’, ‘Radio’, and ‘Search’ but each tab’s home has been overhauled with a sleek new design. The new look makes an emphasis on simplicity and album artworks, using images at the forefront rather than lists of music. Overall it looks like Apple are taking a step back to the aesthetic of original iPod’s, something we certainly aren’t complaining about. 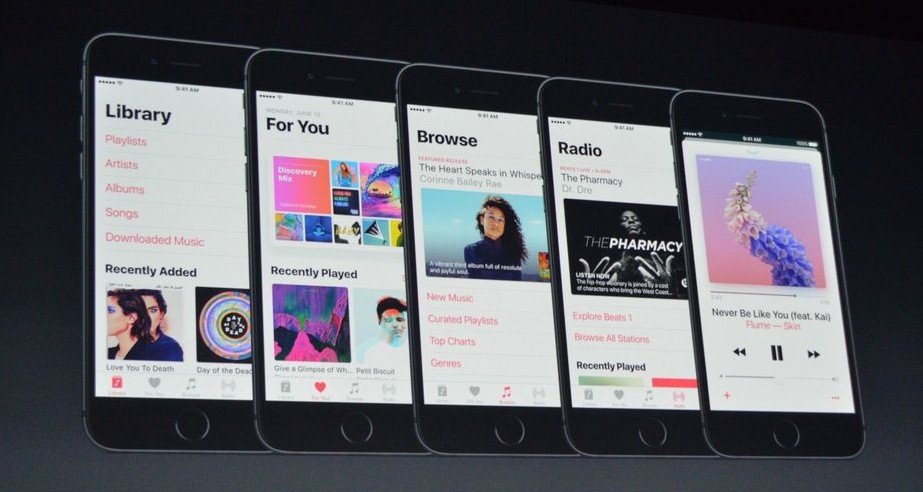 With the updated version of Apple Music the app will open on  your Library so you can instantly access your music, which is now split into downloaded music and your streaming library. The old “home-tab” For You now features 3 sections: Discover, Recently Played, and an all new playlist that is curated daily.

The last new feature revealed at Apple’s WWDC for Apple Music is integrated lyrics, so users can read along with the lyrics whilst listening to songs. This is a feature that has become commonplace amongst music streamers leaving Apple Music as a standout exclusion, but better late than never.

Apple also revealed that Apple Music now has an impressive 15 million subscribers, half of Spotify’s 30 million Premium users and 2 million more than they announced in April. It has taken Apple only a year to achieve such a substantial number, whereas Spotify launched 8 years ago. However Apple have the advantage of over 1 billion iOS devices in use across the globe, most of which come with Apple Music as a default, which some analysts predicted would lead to even higher subscriber numbers than Apple has achieved.

An update to Apple Music’s interface has been largely welcomed as users have complained about the app’s user-unfriendly design and occasional bugs since it’s launch last June. Apple have made small tweaks in the past year but nothing substantial enough to convince those unhappy with the app to sign back up. Perhaps with this sleek new redesign enough music lovers will be convinced to make Apple Music the threat to Spotify it was made to seem.

How to send music fans to streaming services and stores

Spotify, Apple Music, iTunes, Facebook, YouTube – which should you share on social media to maximise clickthrough rate? Fanlinks with Push.fm allow you to share all of them and more with one URL. Our partner…