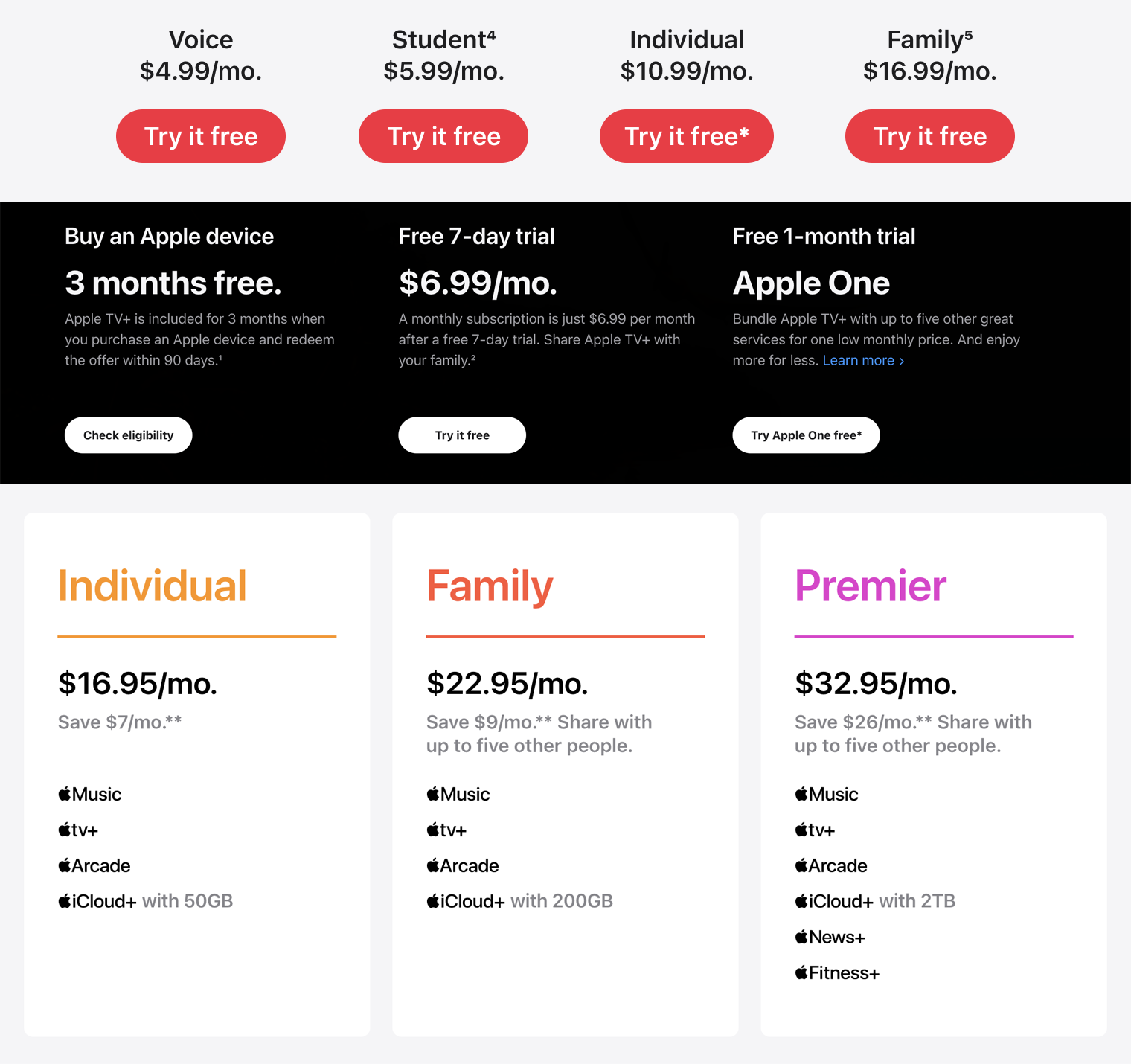 Apple Music, Apple TV+ and Apple One are all seeing price increases of $1-$3 per month or $10-$20 per year for annual plans.

Apple’s music streaming service, video streaming service and all-in-one subscriptions are joining the likes of YouTube in increasing their subscription prices. While this is the first price rise we’ve seen from Apple Music or TV+ since their launch in 2015 and 2019 respectively, it’s not unexpected.

We’ve seen similar price hikes in the past 12 months from Spotify Premium in some markets, Spotify Premium Family in the US, and other video streaming services like Hulu, Disney Plus and Netflix.

The US will see subscriptions of Apple Music, Apple TV+ and Apple One change as follows:

Similar proportional prices can be expected in international markets. Those affected by the price changes will be notified 30 days prior to their subscription renewal.

Apple Music Voice and Student plans are staying the same at $4.99 and $5.99 per month respectively.

Spotify and Amazon Music for now are sticking with $9.99 per month. Even after the price hike in annual subscriptions, Apple Music’s annual option can work out cheaper over the course of a year than Spotify Premium. Equally, if you are already subscribed to one of Apple’s other subscription services (TV+, Arcade, iCloud+, News+ or Fitness+), despite price increases, an Apple One subscription can be a cost effective option.

Spotify are considering adding a Platinum subscription tier, that includes HiFi streaming among other features, for $19.99 per month. Apple Music on the other hand already offers lossless and spatial audio as standard to all Premium subscribers.

An Apple spokesperson said in a statement to 9to5Mac:

The subscription prices for Apple Music, Apple TV+, and Apple One will increase beginning today. The change to Apple Music is due to an increase in licensing costs, and in turn, artists and songwriters will earn more for the streaming of their music. We also continue to add innovative features that make Apple Music the world’s best listening experience. We introduced Apple TV+ at a very low price because we started with just a few shows and movies. Three years later, Apple TV+ is home to an extensive selection of award-winning and broadly acclaimed series, feature films, documentaries, and kids and family entertainment from the world’s most creative storytellers.

We hope, as stated above, these price rises will be seen by artists and songwriters’ payout. Apple Music’s Premium-only music streaming option already pays a relatively high rate per stream compared to the competition.

Get paid more! Upload your music everywhere for free with RouteNote.