Due to a technical issue, there may be a short delay in this month’s payments for earnings made in September. We expect all payments to be made by the 20th of November.

We understand the inconvenience this may cause and we’re very sorry for any potential issues created by this short delay. We are working as quickly as possible to reduce any delays to your payments this month.

As always, if you have any concerns or issues you can get in touch with our friendly support team via a ticket on the website or at support@routenote.com.

Thank you for your understanding.

As an independent artist you want your music to get out there and for the world to hear it. But the next step once it’s live online is getting paid for it, how much exactly will you make from each service?

At RouteNote we pride ourselves in giving every artist, musician, producer, label and everyone else musical the same opportunity as major label artists. We send your music to all of the top streaming services and music stores around the world, all for free. So when the royalties start rolling in, this article looks at how much you make from each service.

It can be very hard to decipher exactly what stores are paying for each stream as each service pays out a different amount and that amount varies in every different territory it is being streamed in. But we can gauge an average estimate of what each store pays out and you can see that as well as a breakdown how each service is running in this wonderful graph from informationisbeautiful.net below. 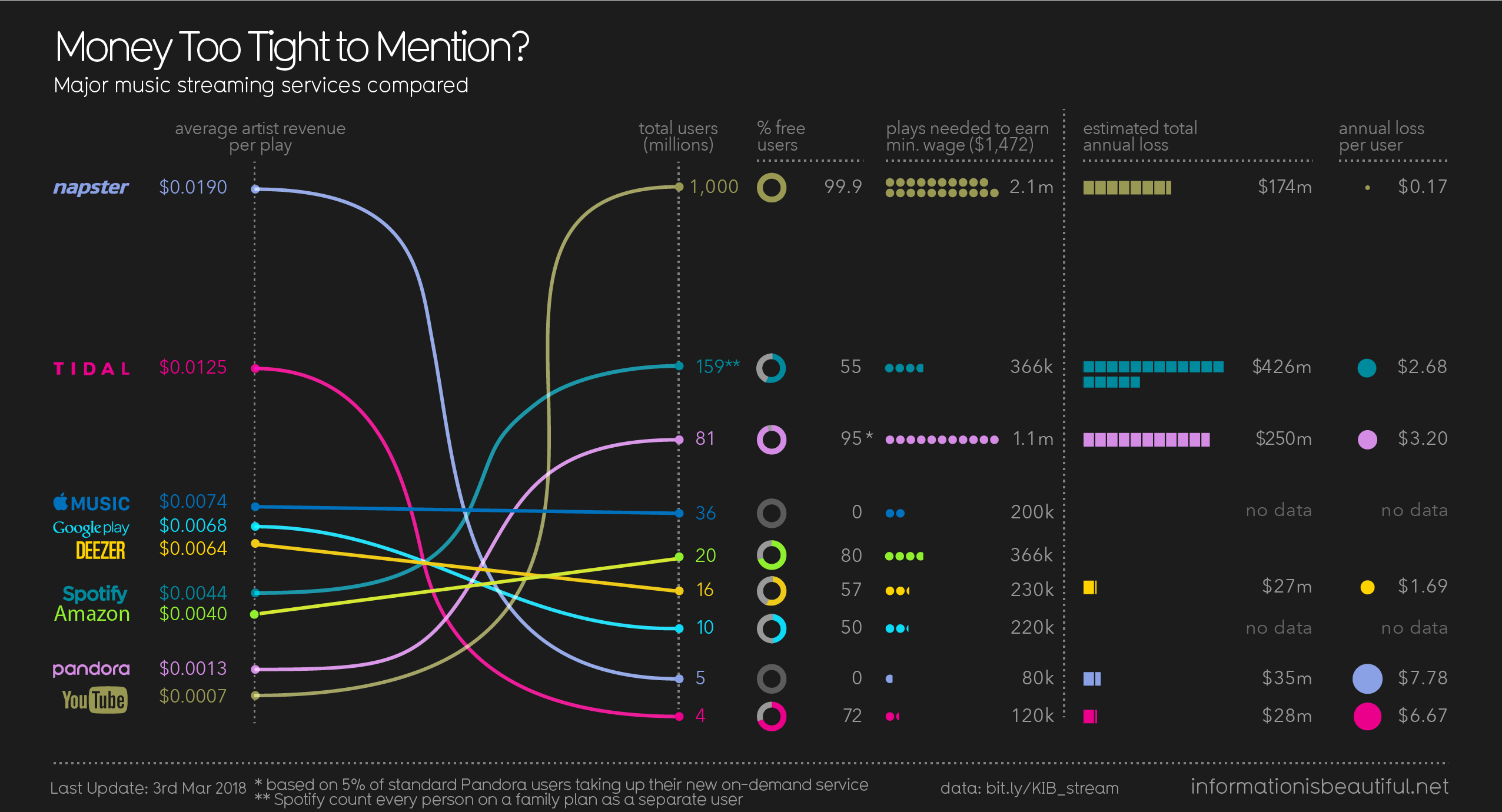 As we mentioned earlier, it’s impossible to get an exact figure of what each service pays out but this is as close as it gets to an accurate representation of what each stream will get you on all of the top services. This graph is based on data from March this year.

SoundCloud are introducing stats cards which let you share your music performance and let friends and fans know when you’re popping off.

SoundCloud have a new feature, making it easier to celebrate your success with shareable statistic cards. Creators are able to download stat cards from the SoundCloud Pulse app where you can share plays, likes, reposts, and comments to social media.

SoundCloud say: “Emerging and established creators on SoundCloud are achieving success everyday, and we know how important it is to be able to tout those accomplishments. This new update offers yet another way for creators to celebrate success. build connections, and your career on SoundCloud.”

Do you want to get started sharing your stats? Here’s how:

This weekend it’s a bank holiday weekend for Easter in the UK so the RouteNote team will be away until the 18th of April. Due to this payments will be a few days later than usual this month.

We apologise for any inconvenience and hope that you all have a great weekend!

Free music streaming isn’t just the biggest source of music today, as it’s been revealed it plays a massive part in the vinyl revival.

A poll by ICM, revealed to the BBC, shows the massive role music streaming is playing in the massive boost in sales vinyl records have seen in the past decade. It showed that half of those who purchased vinyl records recently had listened to the album before on streaming services.

The practice is apparently more common between free, ad-supported services like SoundCloud, YouTube and Spotify free but not limited to these. (I myself pay for streaming and will buy Vinyl and CDs of albums I discover and love) The poll also showed some strange results, for example it reported that 48% of people who had bought vinyl in the past month hadn’t even played it yet, but wait… it gets stranger.

7% of those who had bought vinyl in the survey didn’t even have a turntable to play it! Whilst 41% didn’t use their turntable to play the vinyl they buy. It’s no secret that a lot of the appeal in Vinyl is it’s collectible appeal, with large cover arts and sleeves that feel less tacky than a plastic case. This still doesn’t justify neglecting the warm crackle of listening to your albums on vinyl to me – but hey, as long as they’re investing in the music industry. 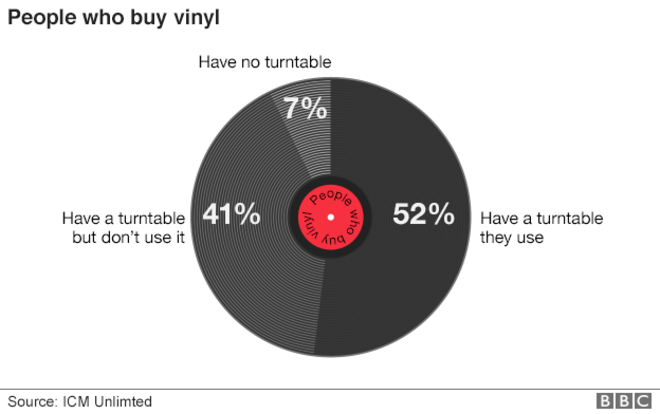 Jordan Katende, a student in Manchester told BBC News: “I have vinyls in my room but it’s more for decor. I don’t actually play them. It gives me the old-school vibe. That’s what vinyl’s all about.”

18 year old Helena added: “It’s really nice to have an object that you can hold and physically play. I also think it’s important to support artists financially if you can. I like it if someone puts effort into making a release look special.”

The news of streamings importance in vinyl’s resurgence comes just days after the IFPI showed that the global music industry was growing in revenue for the first time in 20 years, thanks nearly solely to music streaming with a boost from vinyl sales.

Where do you stand – do you buy vinyl and does streaming play a part in your purchases? Let us know in the comments below.

Stats are currently being delayed to larger than expected volumes of YouTube numbers. We are working around the clock to have these numbers live as soon as possible.

There has been a lot of talk especially at Midem about how Streaming Music services aren’t dominating royalty reports of major companies. I thought I would share some very basic graphs from RouteNote with you. 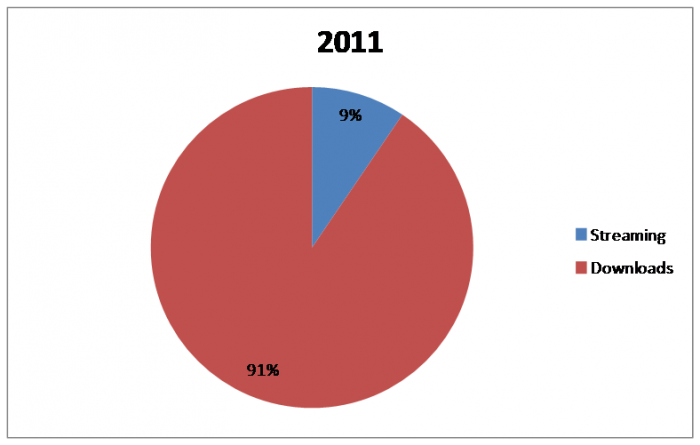 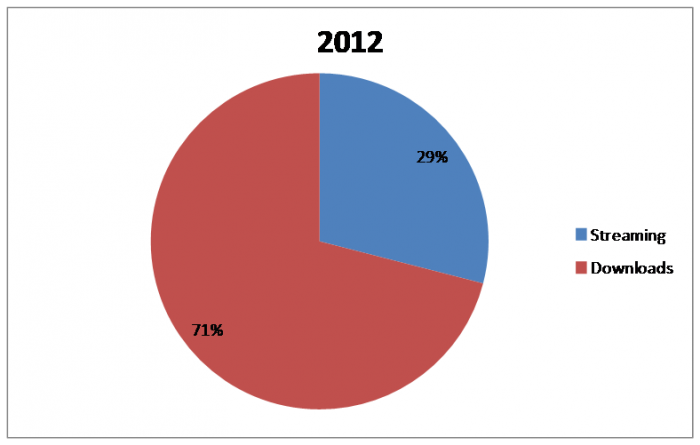 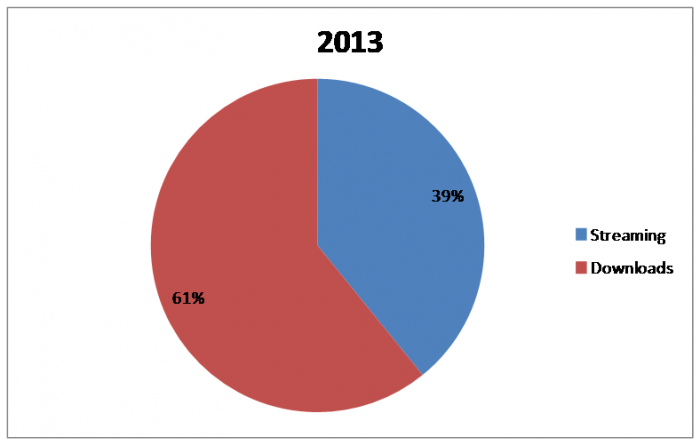 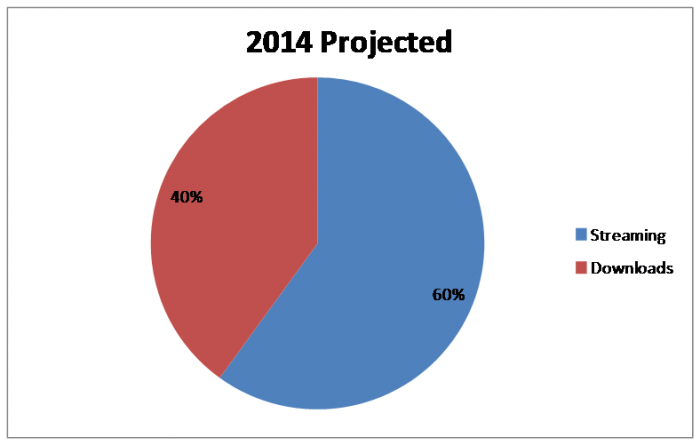 As stated above, we expect music streaming royalties to be the main source of income for the majority of RouteNote artists in 2014.

Here are RouteNote we have been very open about our statistics and offering from the beginning. Today I just wanted to run through how RouteNote is progressing and what you can expect for the future moving forward.

As most startups in the current economic climate RouteNote is no different, we have a very limited advertising and marketing budget which of course means growth doesnt have the possibilities as it would otherwise. However, we have been seeing an increase in traffic every month which is quite positive. I think this increase in traffic has a lot to do with the great press we have been receiving from all over the web (Rev2, Techcrunch UK, CNet, and more).

RouteNote has been developing new partnerships will all different types of companies in a variety of areas. Here at RouteNote we believe that diversity in digital music distribution is key. With download stores there are really only three main players at the moment, iTunes, eMusic and Amazon, and RouteNote has partnership argeements with all of these stores. Soon we will be adding more partnerships to help our musician push their music across the entire internet with the aim of allowing them to reach the mass market, while at the same time offering them top royalty and revenue schemes that are the best in the industry. Watch out for RouteNote partnering with some of the biggest growing music services on the web.

Here at RouteNote we launched in the same way as many other startups. First you have private beta, then beta, then launch the site with a full service. Here at RouteNote we followed the same kind of structure but for us the beta tag is only there because we were yet to release our desktop upload tool. This tool and the beta tag should be completed in the coming months. Additionally, we are looking to add more services in our tools section which aims to help artists find great deals and provide them with the right tools to help self-promotion.

RouteNote is still growing at a steady pace and we are aiming over this time to increase our offering as much as possible. As a RouteNote user you will see added partners in terms of stores, mobile, streaming, licensing and others, as well as a much more rounded product offering.

We’re aware of the fact that we’re a small company compared to some of our competitors, but our cost to bands is also smaller than most of them. All of our major competitors make a charge for either uploading or hosting your tracks, subscription fees, renewal fees, charges for ISRC codes, different charges based on how many outlets you want your music to appear in, the ways they find of hiding new charges are as innovative as they are various.

We don’t charge you anything until you start making money. Uploading is free, hosting is free, picking different stores is free, in fact everything is free until you sell your first track, at which point we’ll take 10% of the revenue that comes back. You get to keep 90% of everything we make by working together. Ours isn’t the lowest percentage rate in the market: CDbaby offer 91% to their clients, but their upfront charges mean that not only do you have to get your credit card out of your wallet and pay them before you can hope to see any return from selling your music, but you’re also worse off with them than us until you sell more than ten thousand units. The same is true of Tunecore and Musicadium, and the Orchard never get close, as they take 30% of sales revenue for themselves AND charge you $90 up front.

Here’s a little table showing what you’d pay up front to distribute 2 albums over two years through some of the big distro sites (Musicadium deal in AUD, which I’ve converted at today’s rate of 1.549 to the USD).

And here’s another detailing the income you’d get from various levels of sales, again based on distributing 2 albums over 2 years to all the stores RouteNote deals with, with an average per track income of $0.65, which is what you get back from iTunes.

As you get up to the 5k mark, Tunecore begin to pull ahead, it’s all pretty even around 10,000 and there are undeniable differences in the revenue earned when you get up towards to 30k sales mark, but we’re cheaper all the way up there, and the money will only ever flow one way – to you – if you deal with us.

So why are we better than our competitors? For artists starting out on their own, who want to be in control of their own destinies until they can prove the worth of their music, who don’t want to spend up-front money, and who aren’t realistically looking for sales of thirty thousand records in the first year or two, we are cheaper, quicker and much more interested in the success of our artists, because we’re smaller and our own success is that much more closely linked to that of our musical partners (read some of our testimonials!).

We had a response from Musicadium about this post – querying the way we’d worked out the fees mentioned. Here’s how it works out, based on the figures here in their agreement:

Although the exchange rate has probably changed by now…