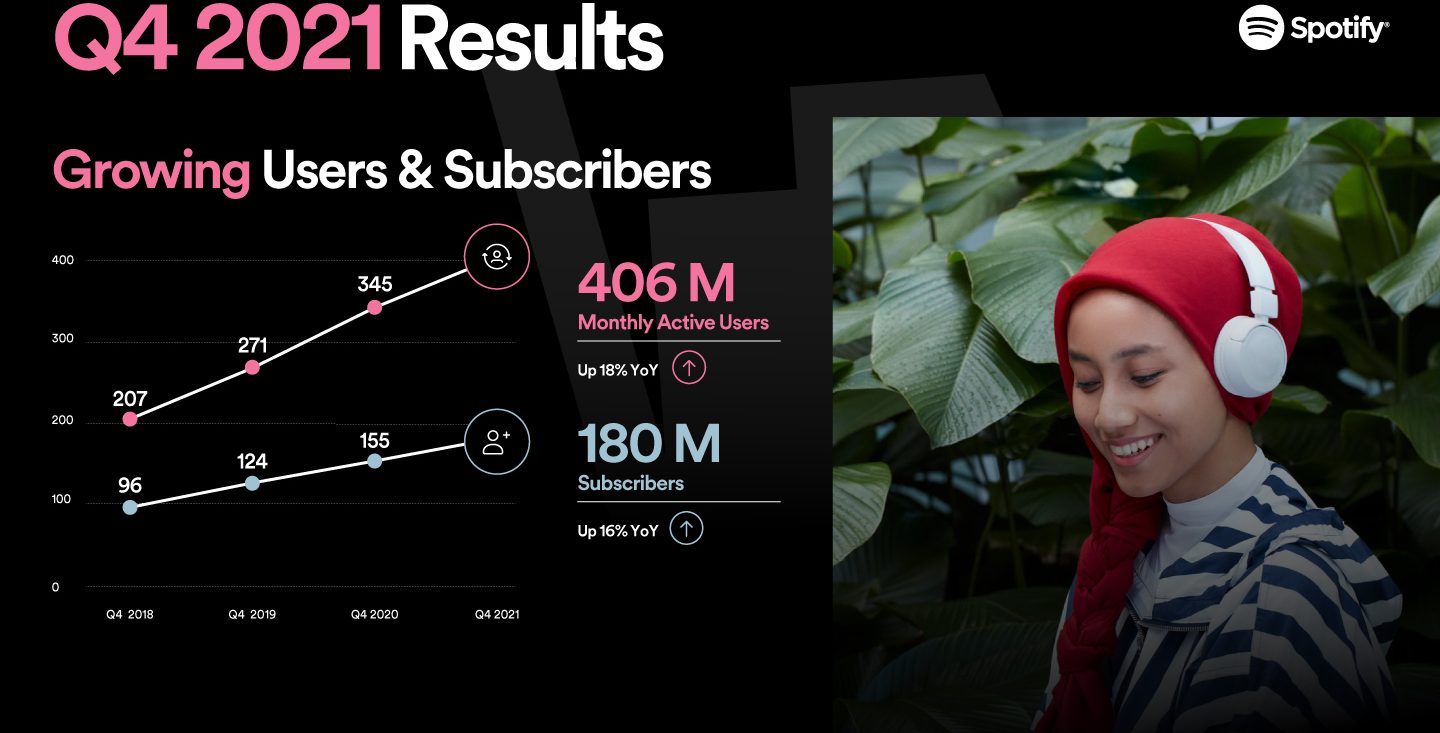 Spotify’s latest financial performance report details the number of Free and Premium users the music streaming service had at the end of 2021.

Spotify just released their full fourth quarter 2021 earnings report, as well as the webcast Q&A on Spotify’s Investor Relations site. Continue scrolling for an infographic of all the highlights from the quarter. Spotify saw impressive growth of both users and subscribers, from 345 million to 406 million monthly active users year-over-year, up 18%, while subscribers increased from 155 million to 180 million, a growth of 16% year-over-year. This is strong growth across the board, but how does it compared to the competition? Click here to find MIDiA’s latest music subscriber market share report. Find Spotify’s Q3 2021 report here.

The infographic goes on to highlight some of Spotify’s other achievements during the quarter, such as the acquisition of Findaway, as they seemingly look to enter the audiobook market, launching in six new markets, releasing 2021 Wrapped, which was viewed by more than 120 million users this year, an increase of 31% year-over-year, introducing a new Lyrics feature, letting users sing-along to their favourite songs, expanding its limited release in the US of Car Thing, their in-car media player, and partnering with Netflix to launch a hub of content around your favourite shows and films. These new features were followed by some artist achievements like Adele’s “Easy On Me” breaking the record for the most-streamed song in a single day, Taylor Swift’s “Red (Taylor’s Version)” becoming the most-streamed album in a day by a female artist, and the most-streamed song on Spotify, Ed Sheeran’s “Shape of You” hitting 3 billion streams. Finally, Spotify highlight some of the new features available to artists and podcasters, including the integration with Shopify on artist profile, making merch sales seamless, bringing 16 new languages to Spotify for Artists, and introducing ratings on podcasts, allowing fans to support their favourite shows and creators to improve discoverability.

Spotify also shared a sizzle reel of audio trailers from their recent original and exclusive podcasts.

Did you know you can get your own music on Spotify for free? Click here to find out how.