YouTube are finally ready to launch their new music service which they hope will give music the value it deserves on their video platform.

YouTube will be launching YouTube Music next week, a new service that distinguishes their abundance of music content from their variety of billions of videos after criticism over their royalty payouts for music. The new subscription service will be the new home to the 2 million artists that share their music on YouTube and where over 1 billion music fans around the world come to listen.

Next Tuesday, 22nd May, YouTube Music will launch as a “new music streaming service made for music with the magic of YouTube”. YouTube Music will bring official songs, albums, thousands of playlists and artist radios in one unified place along with their giant catalogue of remixes, live performances, covers and music videos that can only be found on YouTube.

With their new streaming service YouTube will launch a new, re-imagined mobile app as well as a re-designed desktop player that has been made for music. It will bear similarities to standard music streaming services like Spotify however will feature all of YouTube’s plentiful video content for music as well as user-uploaded and created content that wouldn’t be found on traditional streaming services.

YouTube Music will be available for free with adverts, the same as YouTube itself however will offer an ad-free version. YouTube Music Premium will cost $9.99 a month and offer uninterrupted listening, background listening on mobile, and downloads. YouTube’s parent Google offer a traditional music streaming service in Google Play Music but these services will be combined so that, where available, a subscription to one equals a subscription to both. 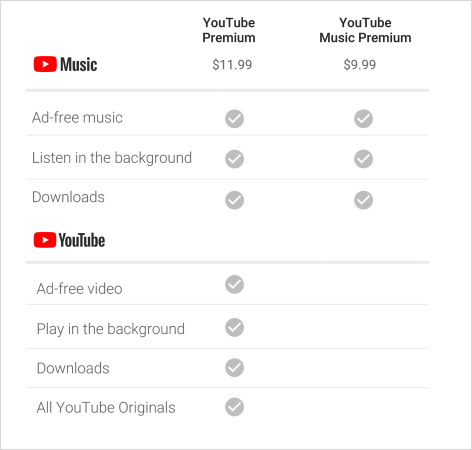 YouTube offer a premium service for their regular, non-music video content called YouTube Red which offers the same benefits as well as exclusive video content and also was bundled in with Google Play Music. Moving forward they will be replacing Red with ‘YouTube Premium’ which will offer the same service but will distinguish non-music content from all videos on YouTube. YouTube Premium will include YouTube Music within it and will cost $11.99 for new members. Existing Red members will retain their same subscription price.

At launch YouTube Music will be available in the US, Australia, New Zealand, Mexico, and South Korea. Over the coming weeks they will also be launching in Austria, Canada, Denmark, Finland, France, Germany, Ireland, Italy, Norway, Russia, Spain, Sweden, Switzerland, and the UK.

Pingback: YouTube Music has launched, here's why it's worth it - RouteNote Blog