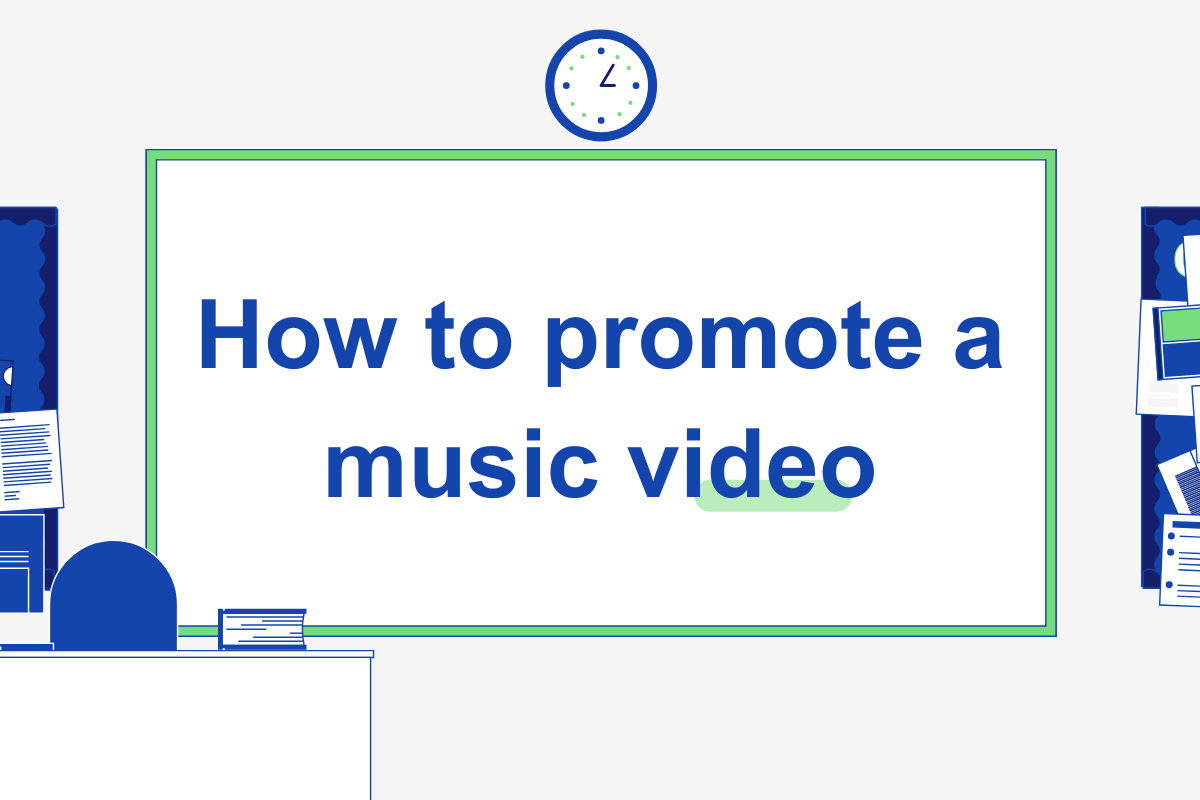 As well as being a chance to get creative and explore the stylistic, artistic side of your music, a video is an important marketing tool for your new release.

The rollout of a new video is a campaign with a whole lot of potential to build excitement around your music. An incredible video, made with social media sharing in mind, can send streams and sales of the song into the stratosphere.

So how can you make sure that your video does well, without spending loads of money on PR? Well. First head here to check out our guide to making your music video, from the simplest lyric video to an extended multi-camera epic… and then come back for some quick tips on how to promote music videos.

When to release your video

So you’ve made your music video – but when to drop it? It’s a good idea to hold back and release your video at least a week after your song is released. In that week you can crank up the suspense of releasing your official music video.

You might also want to first release a lyric video, at the same time as your track. That way you’re spreading out the audience engagement, giving the song push after push once the initial hype of release day has faded.

Look at your social stats and work out where you get the most engagement. If your TikTok is blowing up, it makes sense to place a focus there.

But be careful – social media users are fickle, and the same strategy might not work exactly as before. Sometimes you need to try new things, posting at different times or making different content. Which leads us to…

Social media apps like it when you use their latest feature – for example, Instagram is pushing videos now, so Reels will do better than static photos.

But be aware that social media is constantly looking to the next thing, so chasing trends is an exhausting and often fruitless experiment. Try and be natural about what you post – but within a framework of a mapped out social media strategy.

Build up the suspense

You’re not Adele, so it’s going to take more than a single post to whip everyone into a frenzy. Start promoting weeks before your video is due to be released.

Promo can start when you’re shooting the video – or even in the planning stages. Fans love fun, spontaneous behind the scenes content, so try posting short clips or photos of the location or the backdrop of the set, without giving too much away of course!

Music videos are instantly shareable as they are, but pre-release you can drop still images and smaller clips showing the video release date clearly, to entice your social media followers into checking out the full video when it drops.

Once the video is out you can keep sharing snippets. Choose the most eye-catching part of your video and edit it into a small shareable clip to splash across social media. Pick dramatic stills to pop into your Stories and on carousels.

Search engine optimisation may not be sexy, but it’s vital if you’re releasing your video on YouTube – which you should be, it’s where most people discover new music. There’s no point sending the video out into the vast internet without making it findable by Google.

We’ve got some starter tips on SEO for musicians here. At the very least, you need to make sure all your metadata matches, your tags are going to reach the right audience, and your bio is optimised.

Music marketers Burstimo recommend giving your video on YouTube an intriguing title – not just “[Artist Name] – [Track Title] – Official Video”, but something clickable and YouTube-friendly, such as “This music video cost me $1 to make!” Then you can change it to your track name later once you’ve built up music video views.

Get in touch with the tastemakers of the music world to ensure a share once the video drops. Research music blogs and send out a press release. Check out SubmitHub and Musosoup.

YouTube playlists curators are another source of promo. Search for your music genre on YouTube and find a playlist you think will be a good fit for your video. Head to the About page of the playlist creator – if they have an email address, get in contact to pitch your video for inclusion on their list.

Tease the video across all your social media accounts, from Facebook to TikTok to Reddit. Don’t forget about your website – you’ve got one of those, right? It’s the place that should come up first on Google, showing your discography, tour dates, and so on.

If you have a newsletter mailing list, promote the video before it drops and afterwards to grab people’s attention within their inboxes.

Also – choose a thumbnail for your video that’s going to catch people’s eye and sums up the mood of the video.

Once the video is out, you need to keep pushing it on social media. Depending on your budget, it might be worth investing in ads on YouTube and across social media. For YouTube especially, it’s a way to immediately get your music video in front of the correct audience. Similarly you can tailor Facebook and Instagram ads to target the right fans.

Applying just a few of these tips will help you get more views on your music video. No matter your feelings around social networking, unfortunately you’ve got to play the social game.

Promotion takes time and a lot of energy, yes. But you’ll be rewarded with great results.

Never mind the video – where are you releasing your song, and how much are you paying to do it? RouteNote upload tracks to streaming services and across social media, helping independent artists release their music for free.

Join us here, and send your song around the world.