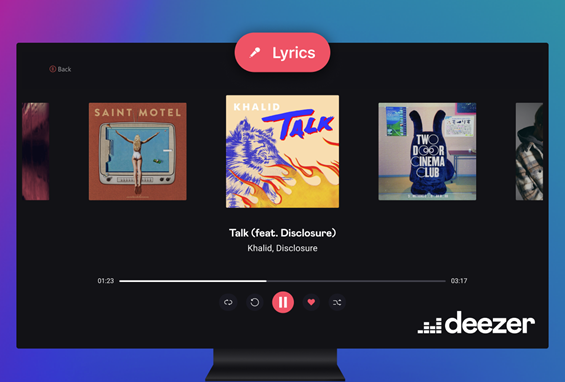 Who needs a karaoke machine? Xbox owners who love a singalong will appreciate the new lyrics feature on the Xbox Deezer app.

Streaming platform Deezer has just announced an update to the Deezer Xbox app, bringing synchronised lyrics to owners of the games console.

Deezer Premium gamers who also love indulging in a bit of karaoke can now use follow the lyrics to their favourite songs onscreen in time with the music.

Clement Durandeau, Partnership Integration, Product Manager at Deezer said: “Our gaming community loves their personal music as much as their favourite Xbox games. Now we’re expanding their console experience with lyrics to give gamers even more entertainment options.”

“It’s easier than ever to have a karaoke sing-along jam when you’re in the mood. And when it’s time for gaming, Deezer is right there with you to provide you with a personal soundtrack that goes along your digital adventure.”

Gaming and music go hand-in-hand, which Deezer is acknowledging by launching two new playlists celebrating 20 years of Xbox. Halo Classics showcases iconic themes from Halo over the years, whilst Xbox 20th is made up of some of the most popular soundtracks from multiple Xbox games over the past two decades. Games like Minecraft and Call of Duty are among the mix.

It’s been a day of streaming platform lyrics news, as Spotify also announced that synchronised lyrics are now available to all Free and Premium users around the world.