2016 was the biggest year in history for music streaming and saw competition heat up between services, but only one can lead…

And in 2016 that leader was Pandora. Whilst Pandora is often overlooked, with the attention focussed on Spotify, YouTube and Apple Music, the free internet radio streamer has been quietly leading the industry.

According to MusicWatch reports Pandora claimed 28% of streamed music listening last year, with 25% gained through their free service and the other 3% on their subscription service Pandora One. Following very slightly behind were YouTube who garnered 27% of the streamed music in 2016, despite controversy over their platform’s payout to artists which some in the music industry has claimed is unfair.

Spotify are often considered the leaders in music streaming however they came out as the third most used source of music listening in 2016, with their Premium and free tiers making up 17%. Whilst Pandora and YouTube’s user bases both surpass Spotify, Spotify Premium came out as the top subscribed service with 7% of last year’s music streaming made by paying Spotify users.

Other notable services include iHeartRadio who made up a decent 6% of 2016’s music streams. Meanwhile Amazon Music, Google Play Music and Apple Music all saw similar levels of success drawing 4% of music streaming each last year. All other music streaming services combined made up the last 10% of listening. 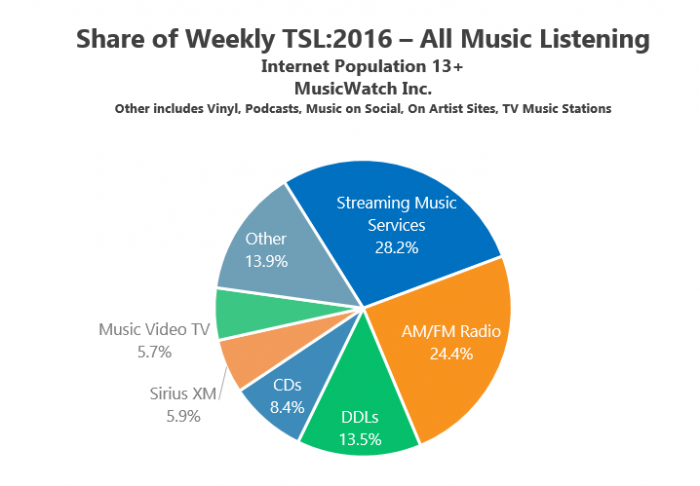 Overall in 2016 music streaming services dominated all music formats with a 28.2% share of music consumption, followed by AM/FM radio which was responsible for 24.4%. Whilst vinyl has been seeing a remarkable comeback in recent years it still represents a niche product making up only 1% compared to the dying medium of CDs which still earned 8.4% of music consumption in 2016.

It will be interesting to see how all of these services and formats evolve throughout 2017 to see which one comes out as dominant at the end of this year. Whilst we can assume music streaming will still be massive, the exciting part is seeing which services continue to shine.

Is the Coronavirus boosting music streaming?

Social distancing and self-isolating are having huge impacts on our lives – are they also affecting how much we listen to music online? People are spending a lot more time at home now, you can’t…

Coronoavirus is good for someone – Joox is seeing a boom in music streaming following the global outbreak and could lead to their expansion. Another music app owned by the Chinese conglomerate Tencent is seeing…