SoundCloud launched SoundCloud Go, their first ever subscription model, last month in the US and now they’re extending their licenses with labels to bring it to Europe within the year.

To launch SoundCloud Go, SoundCloud’s new subscription service, they signed licenses with the major record labels, a move that put SoundCloud in good standing with the music industry as it had been criticised before for unlicensed music being uploaded to their site. SoundCloud today revealed they had expanded their license with Sony/ATV Music to launch Go in Europe.

Sony/ATV’s CEO, Martin Bandier said: “These deals for the US and Europe create the best opportunity for Sony/ATV and its songwriters to maximise the creative and revenue benefits of SoundCloud’s multi-territory business.”

SoundCloud founder and CEO, Alex Ljung added: “Our agreements with major partners are a significant part of achieving our ambition of allowing all forms of creative expression to live on our platform, while simultaneously ensuring rightsholders’ work is rewarded and respected.” 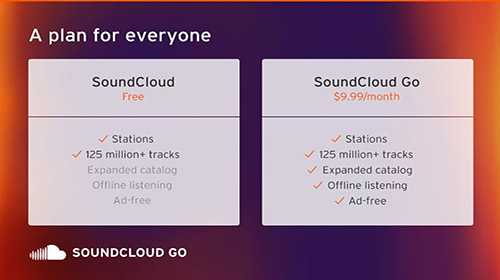 SoundCloud plan to introduce both SoundCloud Go and their ad-based free service to Europe this year. SoundCloud will need to expand their licenses with the other 3 major labels before taking their new services anywhere else, or else limit their catalog. Thanks to SoundCloud’s healthy new relationship with labels it shouldn’t be an issue however and their by-the-end-of-year target should be on course.

As SoundCloud’s model shifts, their platform thankfully remains the same. Some could predict this to be the first step in a move towards a more traditional streaming model, like Spotify or Apple Music. However SoundCloud has built itself on it’s community of unknown and rising artists and recognises fully where it’s niche lies – as an open, community-driven platform for music (and podcasts).

For now we will have to wait for the next piece of news on any actual dates Europe could be seeing SoundCloud Go. If you’re in the US you can subscribe now for $9.99 a month – find out more here.

Facebook have brought music to the Balkans meaning 4 new countries can use music in their Stories, including the music of RouteNote users. Music has been added to Facebook and Instagram in Serbia, Bosnia and…