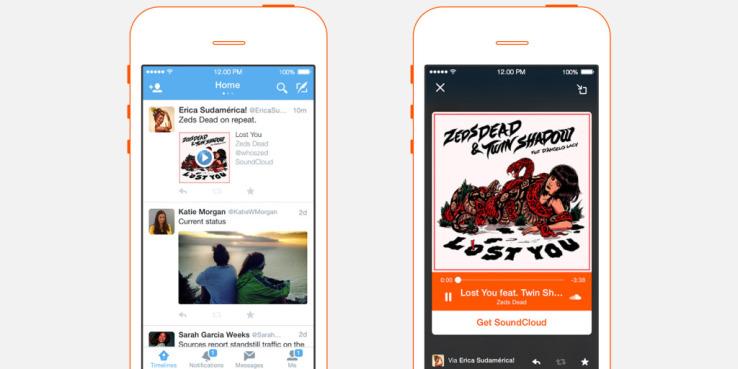 Twitter have updated their Moments feed to support SoundCloud playlists so you can listen to shared playlists in Twitter.

Back in 2014 Twitter added the ability for certain users to embed SoundCloud tracks to their feeds. Now they’re updating the feature so that curators can share entire playlists to be streamed in Twitter’s moments section, the curated feed of news, media and the like.

SoundCloud uses “audio cards” to embed tracks and playlists into a tweet and means you can play tracks straight from Twitter by pressing play on the audio card. The ability to share audio cards is still unfortunately limited, this time to those with access to create Moments with Vice’s THUMP and Stereogum amongst the first adopters.

Hear that? Turn up the volume for @Stereogum's favorite new music, powered by @SoundCloud 🎧 https://t.co/JVtZHMyZ4A

SoundCloud’s extended Twitter integration could mean that in the future we’ll see audio sharing roll out to everyone as the system to do it is clearly there. We understand that Moments can only be created by selected outlets as a curated feed, but why Twitter still won’t allow general users to share SoundCloud audio cards on Twitter is unknown.

SoundCloud playlists can be found in Twitter Moments starting today under the Today and Entertainment tabs.