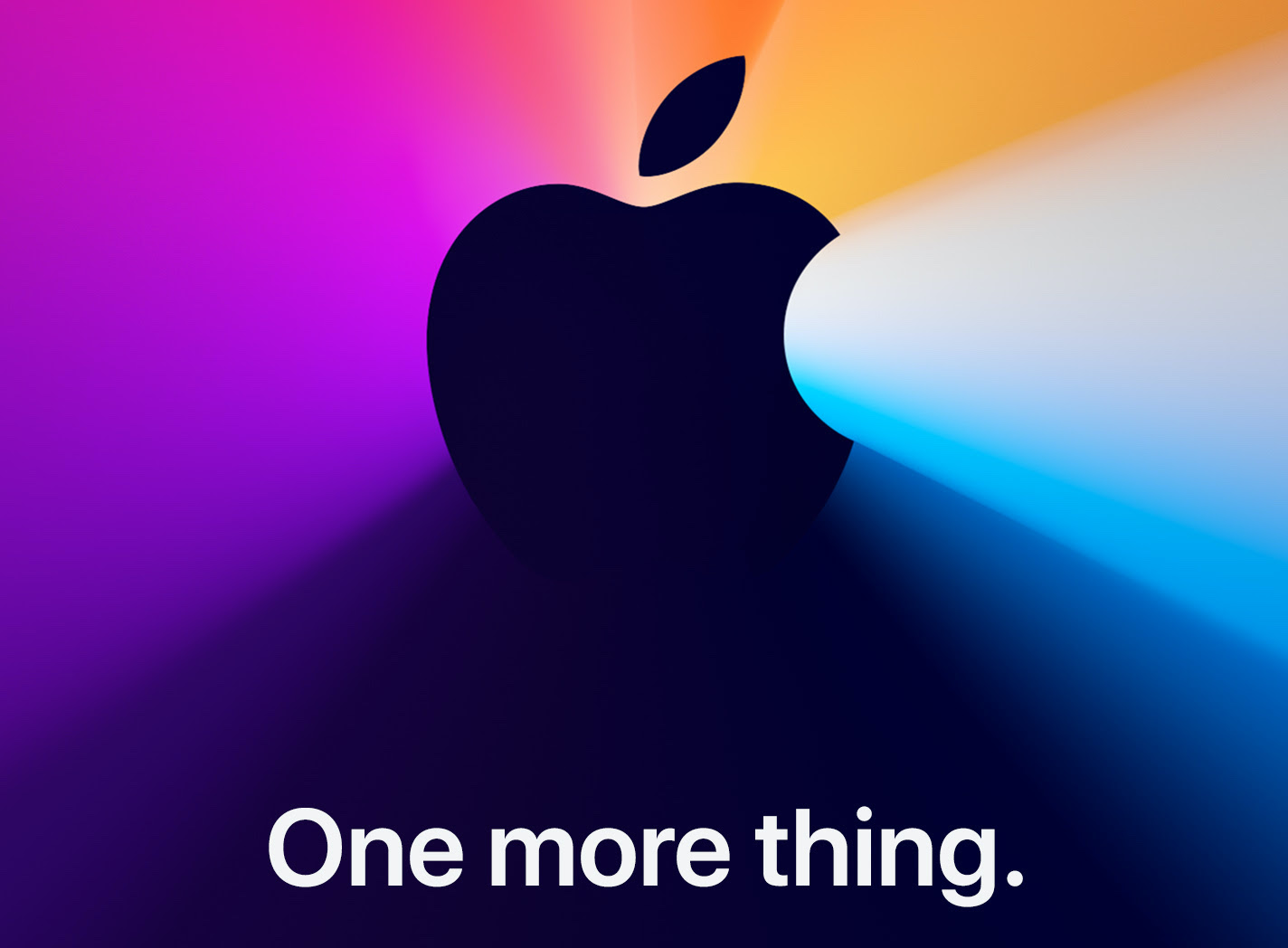 Apple officially announced the date and time of their ‘One more thing’ keynote, the event thought to be dedicated to Apple Silicon Macs.

Apple have sent out invites for their fourth virtual, online, pre-recorded event. The live stream is scheduled for November 10th 2020 at 10am PST, 1pm ET, 6pm GMT, and can be watched on YouTube or Apple.com.

As per usual, Apple are being tight lipped about what we’ll see. All we have from Apple is the graphic – reminiscent of the Mac pinwheel, with the text “One more thing” – a phrase long used by Apple on stage, particularly by Steve Jobs, typically to show off a suprise new product. On the event page of the Apple site when opened on iOS, you can view an AR Apple logo, that seems to mimic a MacBook lid:

While we don’t know for sure what will be released, it’s been speculated for months now that we’ll get our first look at the first Silicon Macs from Apple in November. Apple first mentioned the move from Intel to ARM-based Macs back in June during WWDC, saying we can expect to see the first Mac’s by the end of this year, with a two year transition period for all products.

This will likely be Apple’s most important event of the year, not necessarily due to the products to be released, but more about how it will shape the future of all Macs. ARM-based Macs are all about efficiency, enabling Apple to design laptops with better performance and battery life, in slimmer, fanless bodies. The products should also save Apple money in production. While the end user is unlikely to see these savings, this should allow Apple to put this money elsewhere, such as better overall specs.

This will all be first generation tech, so don’t set your expectations too high for crazy performance or designs just yet. Apple will not be transitioning their full line up at this event. We are expecting the transition to start with lower end Mac and work up through the line up.

This won’t be the first 12-inch MacBook we’ve seen. Released in 2015, Apple introduced a 12-inch MacBook. The most compact Apple laptop. A thin and light enclosure with thin bezels, full sized keyboard, no fans and a single USB-C port. MacBook was killed off last year, when MacBook Air got a much needed update. While the design was great, it was a hard sell while a more powerful MacBook Air was available at a cheaper price. This upcoming MacBook could even be priced below the $999 entry MacBook Air.

Since the larger 16-inch MacBook Pro got an updated design last year, with thinner bezels in the same 15-inch form factor, we’ve been eargerly awaiting the smaller 13-inch MacBook to get the same redesign. Perhaps a 14-inch display in the same physical size. While it would be nice to get a redesigned MacBook, it is thought that the first generation of Apple Silicon devices will be fairly incremental, as almost an experiment, before any radical new designs are introduced.

A redesign to the smaller iMac has been rumoured since June earlier this year. We will likely see Apple redesign both iMacs with thinner bezels, thought to be an iPad Pro-like design. First we’re hoping to see a 23/24-inch iMac whose physical footprint will be similar to the current 21-inch iMac. The larger 27-inch iMac was updated earlier this year with Intel processors, so we won’t see Apple update this until next year.

Demoed at WWDC in July, Big Sur offers one of the biggest updates to Mac’s operating system since OS X. Apple still lists the release as “Coming this fall”. While we usually see the release of the new macOS alongside iOS updates, being such a big release, it’s understandably been delayed. If not released during the event, we will likely see a release date for the OS update.

While AirTags doesn’t really fit in with the theme of a Mac event, the new product are now though to be ready for release. Much like Tile tracks, AirTags are thought to be Apple’s own Bluetooth tracker using the new Ultra Wideband chip.

What we won’t see

The over-ear headphones seem to have been further delayed until March 2021 due to production issues. We are also expecting an update to AirPods and AirPods Pro next year.

The notable exceptions to lower-end Macs that we haven’t heard any news about are MacBook Air and Mac Mini. A new MacBook Air is unlikely, due to the updated 12-inch MacBook. Mac Mini should be updated early next year.