Back in 2015 we spoke to four talented lads from Manchester about their quickly rising band No Hot Ashes. Fusing funk, rock and pop the band have shown no sign of stopping since and with a hot new single releasing later this month we caught up with where they guys have been and where they’re heading next.

First of all let’s catch up from the last time we spoke back in 2015. You guys had just released your single Easy Peeler and looked set to take over Manchester with your gritty funk. What have you been up to since as a band?

Hello! – well “Easy Peeler” went down really well and was a good stepping stone for us, it is now a firm favourite in our live set and we always get the fans singing back the words. Since then we have played the likes of Kendal Calling, YNot Festival, Tramlines Festival and supported some great bands like Spring King, Walking on Cars, Prides and The Amazons. We also released another single “Cool Cat” in early 2016 and that has had such a great reception too.

Last time I spoke to you, your aim for 2016 was to expand outside of Manchester and start playing further afield. Were you able to fulfil your ambitions last year?

We definitely have. 2016 took us all around the country, we gigged in so different parts of the UK and it was great to get out of Manchester and meet new people who now love our music. Cardiff was a particular highlight (Hoyfest 2016) and it was also the furthest we had travelled. We are continuing that into 2017 and one of our first gigs of the year is in Dublin so we are aiming to carry on travelling around the country to spread our music.

Your upcoming single “Bellyaches” is great and I can hear some new sounds for you lads in the music. What inspired your new single and was the creative process for this track any different to creating your other tracks?

The writing process for “Bellyaches” didn’t change at all, like with all our songs it usually starts with Isaac &amp; Lui coming up with a guitar based melody or chords and then bringing it to the practice room for the full band to come together and structure the song. Once we get into the studio we let Gavin Monaghan (Editors, The Twang, Ocean Colour Scene) our producer work his magic and he really pushes each of us to play the best we can and also suggesting ideas to build the song and really beef up the mix.

We owe a lot to him for making us better musicians and songwriters. Each time we come out of the studio we have developed and took away something to make the next song we write even better.

With your popularity continuously rising, how has that affected the chemistry between you all as a band?

In terms of friendship, nothing has changed. We all bounce of each other and there is a special bond we all have from being in a band together and we always have a good time when we are travelling and staying over in different cities. In terms of professionalism we have all got a lot more clued up and have had to make the sacrifices that come with being in a band.

It isn’t a nice job at times and a lot of the time there is very little reward behind the scenes but gigging and recording is really what makes us buzz, being creative and getting that rush on stage.

You’ve always emphasised as a band your enjoyment in playing live. Is playing gigs still your favourite part of being in the band and how has that changed as the audiences get bigger?

Performing is still the best part of being in the band for us. Especially hometown gigs where we can sell out 200cap venues and have a load of mental 14+ year olds jumping at the front, you can’t help but smile at times like cos` that is the biggest reward you can get. Each time we gig in Manchester the crowds seem to get bigger and more rowdy and that is just the way we like it. Hopefully we are now starting to mirror that in other cities.

Alongside that we really enjoy the studio, more specifically our Producer Gavin and his Magic Garden Studio. The place is our second home and we try to get back and record with him as soon as our band fund allows us to. Being able to drop your Job/University normal life and spend days in the studio concentrating on your music and being in a totally creative and experimental atmosphere is just a great feeling and Gavin & Joe (Engineer/Mixing) really understand us as musicians and since day one we have all got on incredibly well as people as well as musicians. 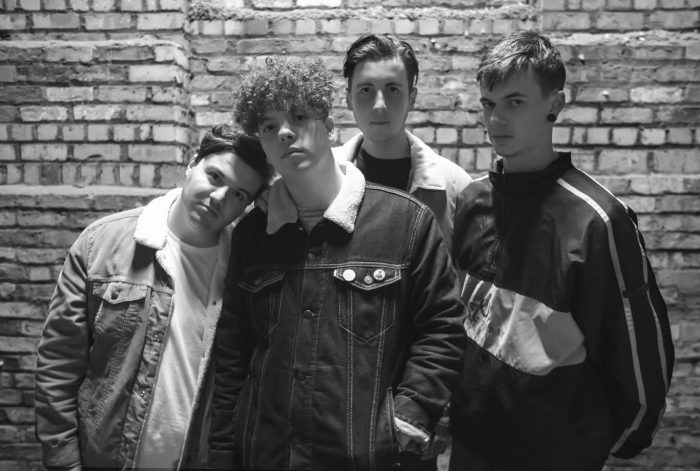 2017 has only just begun and is looking to start off as a big one with “Bellyaches” releasing soon. What are your plans for the rest of the year?

We get really stir crazy once we have just released so in true NHA fashion we are going straight back into the Magic Garden to work on new material. We can’t wait to release “Bellyaches” and we all agree that musically and commercially it is the best song we have written to date (although we say that after every release) but all jokes aside we are really excited to show people what we have been working on and a big shout out to Florence Burns who does all of our artwork/branding for making the whole release so complete.

We love to create a real concept and feel to each release and Florence is just as important as the music we play in terms of completing that creative process.

Finally, what would you want to say to all your fans out there?

Big love to you all, you are the reason we do what we do and please keep buying our merch otherwise we can’t afford to eat and dress ourselves.

No Hot Ashes new single ‘Bellyaches’ releases on the 20th February. Be sure to catch it for even more funky goodness!

Check out our interview with musician, owner of record label EEM Records and businessman Manuel Avendaño, otherwise known as Jowynalex.