Seeing the success of Amazon’s AI when used casually like a home assistant Microsoft announced last week that they would be taking on the success of Echo with further Cortana integration into tech products. Amazon have seen surprising success with their Echo speakers which feature an inbuilt AI, Alexa, which you can use to search the web, play music, make appointments and much more.

Now Cortana is being put into her first home speaker with Harman/Kardon, a third-party device maker that have teamed up with Microsoft to integrate their Cortana AI as a personal assistant. The voice activated speaker got it’s first teaser yesterday focussing on it’s use of Cortana and advertising itself as “Premium Audio Meets Personal Assistant”.

This is the first of many Cortana integrations that Microsoft plan for the future, looking to integrate “her” into a variety of home devices including fridges, toasters, even thermostats. Microsoft program manager Carla Forester said: “This will enable you to build devices with displays, so you get that immersive Cortana experience. Any kind of smart device with a screen can now take advantage of Cortana.” 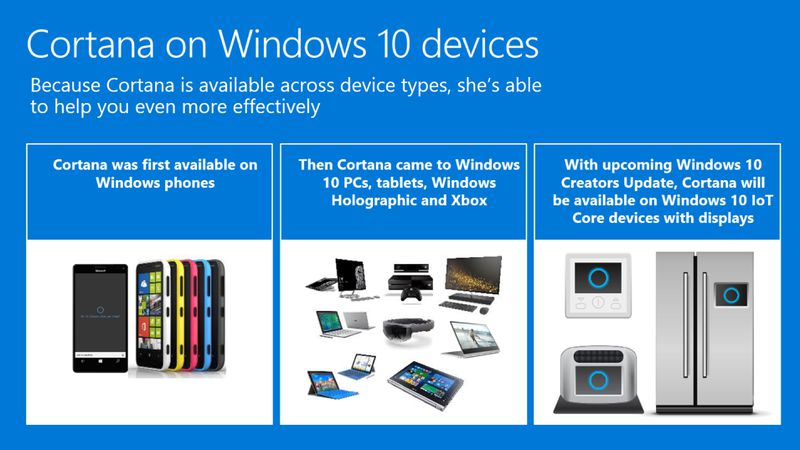 The screen is also included on the top of the Harman/Kardon speaker, though it seems it’s only purpose is to display Cortana’s iconic blue ring rather than act as a working display for pictures, video, etc. Amazon meanwhile are reportedly planning their next smart speaker which is rumoured to feature a full display that can show pictures, video, calendars, etc.

The Harman/Kardon speaker is Microsoft’s first move into what they seem to hope will result in integration across many home tech devices. It sounds like a sci-fi future but as Microsoft are working with third-party manufacturers to extend their reach we could see homes with internet connected AI in different products for every room. Asking your fridge for the weather is or telling your bedside lamp to set an alarm might not be a distant fantasy.