Cortana is in a smart speaker at last as Harman Kardon launch their rival to the Amazon Echo and Google Home.

The Harman Kardon Invoke lets you stream music from Spotify, TuneIn, and iHeartRadio currently with Pandora on the way. It pumps audio through 3 high-frequency drivers and 3 mid-range before exiting the 40w amp. It’s speakers are more powerful than Amazon and Google’s home speakers and reviewers are attesting that it equals better sound quality in the Invoke.

There are 7 microphones built into the Invoke with 360-degree adaptive technology, meaning it can recognise voices from any direction. It uses Harman’s beam forming, echo cancellation, and noise reduction algorithms to ensure Cortana can hear you clearly, even in challenging environments.

Now Microsoft’s personal digital assistant joins you in your home – enhancing your favourite moments so you can focus on what’s important. Invoke delivers exceptional sound, and with Cortana’s intelligence you can voice control your music and smart home devices, create reminders and lists, manage schedules, get answers to questions, make and receive hands-free calls with Skype, and more. 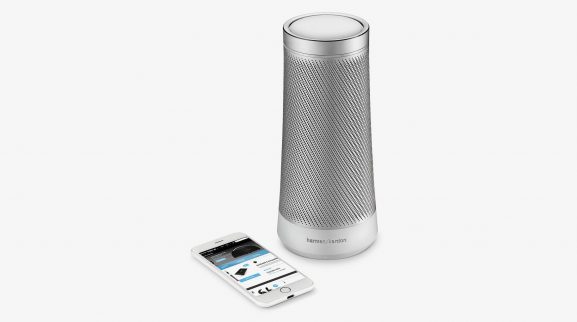 Invoke is the latest speaker to join the increasingly popular AI-powered home speakers that Amazon have helped make commonplace with their well liked speaker. Since the Echo started spreading through homes like wildfire many other tech companies have stepped up to compete, with Google the main rival currently and a planned Siri powered speaker from Apple on the way.

The Harman Kardon does come at a slightly higher price than it’s competitors, available for $199.95. With limited streaming services to work with it might put a lot of people off but the premium audio quality and use of Cortana rather than Alexa or Google Assistant might be enough to tempt some.

Find out more and buy on for yourself here: www.harmankardon.com/invoke.html