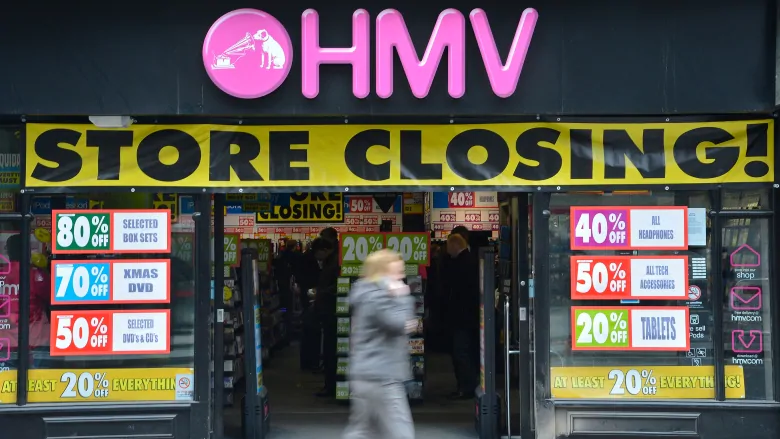 The UK’s biggest music retailer are struggling to keep up as music goes digital going into administration after clawing their way out of it 5 years ago.

It’s a sign of the times – the high street is slowly dying as Netflix and Amazon replaces DVD shops, digital music services replace record shops and Amazon replaces every other shop. After high street retail suffered the biggest Christmas slump yet and the “worst year on record” for sales in 2018, the UK’s biggest physical music retailer HMV have come out of the festive season worse for wear.

The British chain of record stores have entered administration putting 2,200 jobs at risk and telling of a larger story in which physical music is going out the window and high street chains are losing appeal. As a sign that the physical music chain may have reached it’s end, this is the second time the company has gone into administration after restructuring specialists Hilco saved the brand in 2013 with a £50 million deal.

HMV are a major part of the physical music industry in the UK, accounting for nearly one-third of all physical music sales. However, the issue isn’t that people are listening to music less but that the industry is shifting to new ways of listening to and consuming music. Music streaming is booming with millions of people coming to services like Spotify and Apple Music every day to listen to music.

The fact is people don’t want to buy a CD from a shop anymore when they have the world’s catalogue of music at their fingertips. People still value music, but the dynamics are changing. Whilst CD sales dwindle vinyl records have seen a massive resurgence as people look to the old format as the physical counterpart to their digital libraries. Live music has also become a much larger asset to musicians and artists as the industry reshapes itself to the digital shift.

Accountancy firm KPMG have been appointed as joint administrators for a high court hearing today to find a buyer for the business or to decide on it’s closure. Their 125 stores across the UK will remain open until talks with suppliers and potential buyers reach a conclusion. Experts have advised that anyone with gift cards use them as soon as possible as they may be invalid following Friday’s result, as could refunds and item exchanges.

Will Wright, partner and joint administrator at KPMG, has said: “Whilst we understand that [HMV] has continued to outperform the overall market decline in physical music and visual sales, as well as growing a profitable ecommerce business, the company has suffered from the ongoing wave of digital disruption sweeping across the entertainment industry. This has been in addition to the ongoing pressures facing many high street retailers, including weakening consumer confidence, rising costs and business rates pressures.

“Over the coming weeks, we will endeavour to continue to operate all stores as a going concern while we assess options for the business, including a possible sale. Customers with gift cards are advised that the cards will be honoured as usual, while the business continues to trade.”