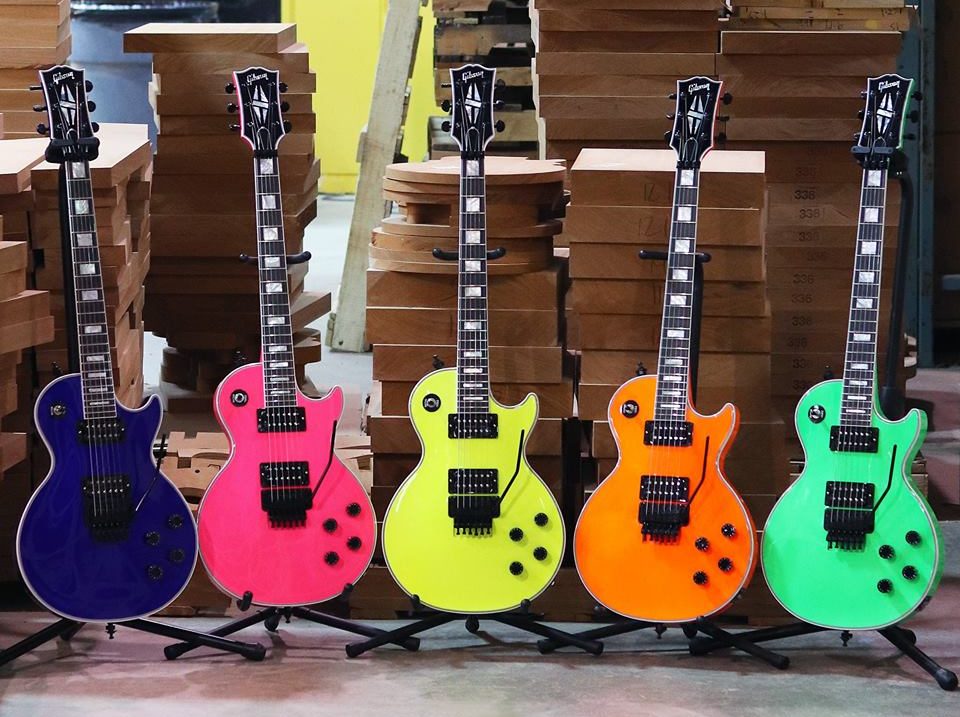 Gibson have revealed a new range of Les Paul’s with a “fun and functional” design… But with a $5000 price tag a better fu- description is ‘f**king ridiculous’!

Gibson have cemented themselves as legends in guitar history many times over. Les Pauls are undoubtedly a staple in the world of guitar and have influenced many before and many to come. So this new range seems like an insult to real guitarists with gimmick written all over it.

The new Custom “Axcess” Les Paul range brings a bunch of horrible neon colour designs on to their guitars for when you want to look like you’re playing a big piece of candy. That said a couple of the colours look pretty cool, I wouldn’t say no to an orange pinstripe LP, at a price of $4,899 you can throw any chance of purchase out of the window.

Fair enough, a really nice guitar by a top brand will cost a fair chunk of money – but when it’s a gimmicky range based around appearance more than performance that’s a ridiculous price. In an age when independent manufacturers are pumping out amazing guitars for less than $1000, even competitors like Fender, it’s hard to see this as anything but Gibson using brand name for sales.

Gibson are already facing backlash from their new range, on Facebook a fan wrote: “Dear Gibson Board Of Directors: Please stop all further capex expenditure requests related to new product development and utilize your budgeted spending towards real market research to define customer wants and needs.
Gimmick devices such as robo-tuners and neon tops are not what the real Gibson reputation is built on.
The Gibson name brand has such an incredible history, we all want to see it continue!”

Another user agreed that despite actually liking the colours the cost was too much, saying: “I’m in the minority here because I like the flashy colors and the Floyd so if I can put that together with my Les Paul fix, I’d be good with that. HOWEVER, being a $4900 custom shop means forget about it for me and I’m sure too many others like me for this to be a worthwhile venture for Gibson.”

If you want to look into the guitars further you can head to their website page but I warn you, the specs will only make you sigh: www.gibson.com/Products/Electric-Guitars/2017/Custom/Neon-Modern-Les-Paul-Axcess-Custom.aspx