Spotify are still the clear leaders in music streaming as their latest shareholder letter reveals that Spotify’s user growth is still massive.

Spotify have just revealed their letter for shareholders with all of the latest data on their users and performance and shows that they are still the kings of music streaming. The biggest piece to note was that Spotify have ended the second quarter of 2018 with 180 million users.

The report also reveals that Spotify have surpassed 80 million Premium subscribers with a 10% rise from the 75 million paying users they had at the end of the first quarter of this year. The divide between their paid users and ad-supported, free listeners is growing ever-smaller and their new shareholder report reveals something very interesting – their ad-supported users actually decreased in the last quarter, signifying a great period of conversion for free users signing up to Premium. Their ad-supported monthly active users dropped from 102 million to 101 million. 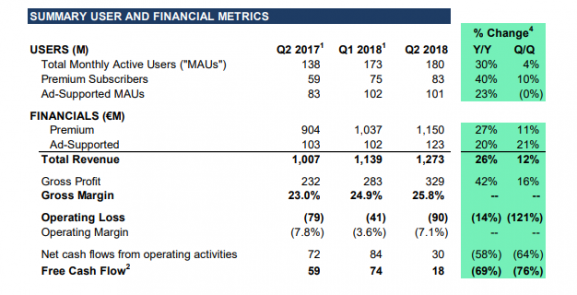 Spotify explained a bit about where this change in growth is coming from: “Earlier this year we began rolling out a new user interface for our Ad-Supported tier of service, the first major revision since our mobile product was introduced in 2014. We expect this new user interface to drive improvements in engagement, retention and conversion.”

Spotify’s revenue is also seeing impressive growth especially following their IPO entry onto the stock market earlier this year. Their total revenue for this quarter was €1,273 million which is up 26% from the same period last year. They cite changing foreign exchange rates as having a negative impact on their potential growth, which they say could have been up to 35% of revenue increase from 2017. 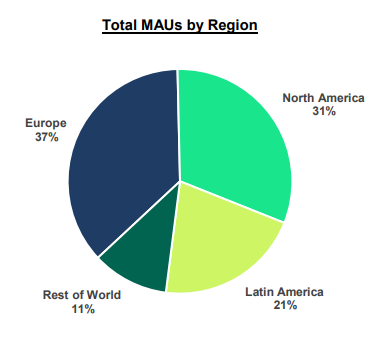 Spotify also talked about potential changes to how free users see ads on their music streaming platform after they recently began testing ‘Active Media’ in Australia. Active Media gives users the option to hear, watch, or skip the audio and video ads that Spotify presents to them. They say: “We believe this system will better enable us to understand what drives intent and engagement, and ultimately allow us to personalise the ad experience in the same way as our most popular playlists.”

Whilst everything is looking pretty good for the current favourite streamer the increasing competition in music streaming isn’t slowing down, especially with Apple Music’s phenomenal growth encroaching on Spotify. It was recently reported that certain industry execs had predicted Apple Music will have more paying users than Spotify before the end of the year.