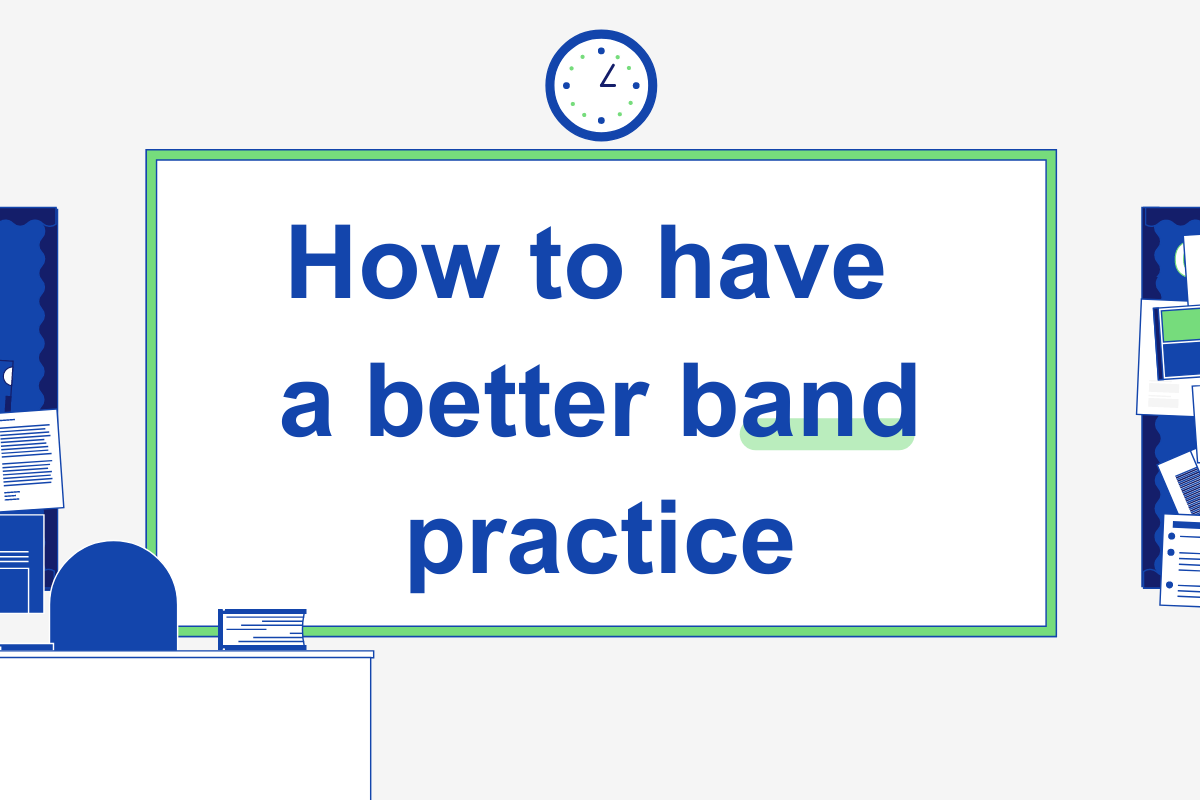 Back gigging again? Get the most from your band rehearsal and have a happy and productive session with these top tips for band practice.

Things are looking up in the live music world. In many parts of the globe, gigs and concerts are finally creeping back. It’s an exciting time to be in a band after more than a year of being unable to play in front of a live audience.

The only thing is, you and your band might be feeling a little… rusty. As exciting as it is to be back playing music with your mates, things are bound to be not as smooth as they were at the beginning of last year. With tour dates and gigs being booked into the calendar, it’s time to knuckle down and get some band practice in.

Every band is different – some are business-minding and serious about planning to make a career in music, others prefer to just have fun and see what happens. Whichever category your band falls into, have a think about some ways to get the best out of band practice with these top tips.

There’s no point trying to do too many things at once. Let yourself ease back into the working band mindset. Don’t try and overstuff the first rehearsal, instead choosing three or four tracks to really focus on.

Ending with a jam of something you’re really confident on, or that you all simply find really fun to play, will have you leaving band practice on a high. That applies to any band rehearsal, too.

Decide beforehand which tracks you think need extra practise, or which cover songs you want to try out, so that you can each get some practise in alone beforehand and not waste time learning from scratch in the session. Turn up on time and try to tune up guitars, basses and so on beforehand.

Everyone likes to show off a bit, but don’t sit there noodling when the singer and bassist are trying to work on the outro. Instead of accusing others of playing something wrong, offer constructive criticism and help them out.

Bands are like relationships. You’ve got to learn to compromise; know when to stand your ground and when to let things go. And importantly – don’t be the one who never buys a round.

Get the band organised

If you’re lucky enough to have a band member who everyone agrees is the most organised, it might be a good idea to make them in charge of deciding when and where you practise. Everyone has their own commitments and it can be a nightmare getting the band in the same room at the same time. How often rehearsal occurs is up to the band, but once a week is usually a good start.

But make sure you’re all pulling your weight on the business side of things – give everyone a job to do. Unless one of you is universally agreed to be a bit of a shambles, that is…

Yes, if you’re determined to be successful you’ll have to knuckle down and concentrate on a plan at some point, but don’t forget that any time playing together is time well spent. Especially after a year of sporadic lockdowns. So have some fun.

Try not to get frustrated if you don’t accomplish what you wanted in the last rehearsal before a gig. On-stage adrenaline will give that final push. Endless band rehearsals are no substitute for being in front of a live audience.

Know when to be sensible

Recognise when it’s time to focus to be ready for your first gig. Set up facing an imaginary audience so you can work out how things will work onstage.

Unless your friends, boyfriends or girlfriends are involved in the band in some way – helping with social media, acting as publicist – it’s usually a good idea that they’re not there for all the rehearsals. Of course, if they’re part of the team and offering useful criticism, it’s a nice ego boost to have loyal fans hanging around.

End the session with a plan on what to work on individually between now and the next band practice. And of course, communicate in a group message in between, not only to keep each other motivated and stay on track for the next practice but to keep that camaraderie going.

Hit record in your band practice and forget about it until you’re relaxing afterwards. Recording video will show you what you look like as performers; recording audio will show you what you need to work on in your set. Individual band members will then know what to practise on their own between rehearsals – if there’s a riff the lead guitarist is desperate to nail, they can do it in their own time. You can record your individual practice sessions too.

If things are getting a bit fraught, taking regular breaks can help, especially if you’re rehearsing with the band in a dark garage. Get out into the fresh air – good for sparking creative ideas, and good for band morale.

Some band members might be feeling nervous about the return to live gigging again after quite a break, so go easy on yourselves. Enjoy being able to be back in the same room again, playing to real live human beings – just don’t forget that practise makes perfect.

Has your band just finished recording a new track? Why not release your music. RouteNote digital music distribution sends music by independent bands out to the world via all the major streaming services.

For free, you can get your name out there and start making money from music. Find out more here.