Spotify’s Premium subscription has more users than any other paid music streamers and is earning more every day, but could this mean an end to free streaming soon?

In a blog post by Music Industry Blog based on studies by MIDIA they touch on the future of Spotify’s free model. With leaked numbers showing that Spotify now has 37 million paying subscribers Spotify’s success might not need a free model to attract and convert users anymore.

Just 4 months ago Spotify were celebrating 30 million subscribers and they’ve already added more than a fifth paying users. They have more than double the subscribers of their closest rival Apple Music, who are also now reportedly losing more subscribers than Spotify on a regular basis.

With Spotify so far ahead of their rivals it brings into question how much longer they need their free, ad-supported platform to attract new users. Now that’s not saying there’s any suggestions Spotify will stop their Freemium model – we’ve seen recently with Guvera how a lot of users don’t like having their free profile taken from them.

The problem with Spotify’s subscriber rates is that many of these are spurred by special offers, like their popular ‘3 months for $0.99′ offer. Whilst it can entice long term paying users a lot of users often go back to free streaming afterwards. Thanks to these deals the IFPI reports that labels’ revenues per subscriber dropped from $3.16 to $2.80 between 2014 and 2015.

Over half of Spotify’s 7 million new subscribers since May were from promotional offers according to Music Business Worldwide. About 1.5 million of those are expected to “churn”, in other words leave, when the promotion ends. The most interesting part of this pointed out by Music Industry Blog is the high conversion rate of 79% with promotions. On the other hand, with over 100 million users in total that means their free tier only has about a 37% conversion rate (technically – it’s of course more complicated than this). 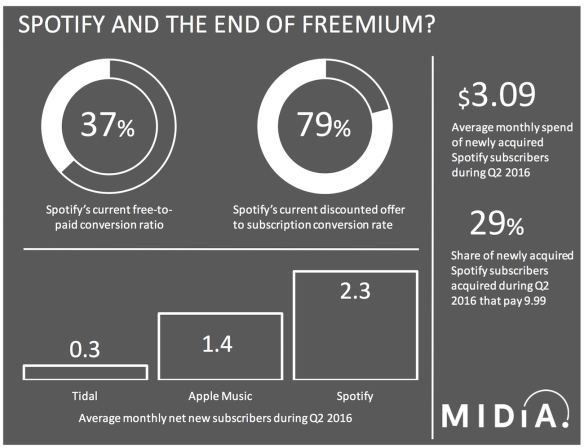 Freemium has been brilliant for Spotify in their 8 years of existence and could well be what led to it’s position at the top of the music streaming market today. But with increasing pressures from the industry it could be on it’s way out. Or it could be here for the long haul – this is speculation but it might make sense for Spotify to retire their free service.

What do you think – would Spotify ever get rid of their Freemium tier? Let us know in the comments below.