Apple’s latest practical joke costs $160 and the joke’s on you, but AirPods are slowly sinking in as a real product and so are it’s ridiculous accessories that just emphasise AirPods’ awfulness.

Apple announced AirPods alongside the iPhone 7 last month. Maybe they just needed a scapegoat to take away from the removal of the headphone jack or maybe Apple seriously think people want this. Either way it may have been worth it for the somehow more ridiculous third-party accessories being created to work around the many shortcomings of the AirPods.

The latest product to catch my attention with it’s god-awful-ness is an earring designed to catch AirPods if they fall out. Do they look as ridiculous as the concept is itself? Yeah they sure do, with a bright blue twisted basket that looks like a basketball hoop for Smurfs. Unfortunately (well not really…) you can’t actually purchase a pair as they were created by micro 3D-printer company M3D as a free template to 3D print.

Rob Marietta of M3D spoke on the earrings to Digital Trends, saying: “We were in our office, joking about what would happen if someone got one of these hooked into their large hoop earrings. After a while someone said, ‘Well, maybe we should aim for that.’ Based on that comment, we started working on this, with the idea that it could be the perfect stocking stuffer for someone to give an iPhone fan this Christmas.” 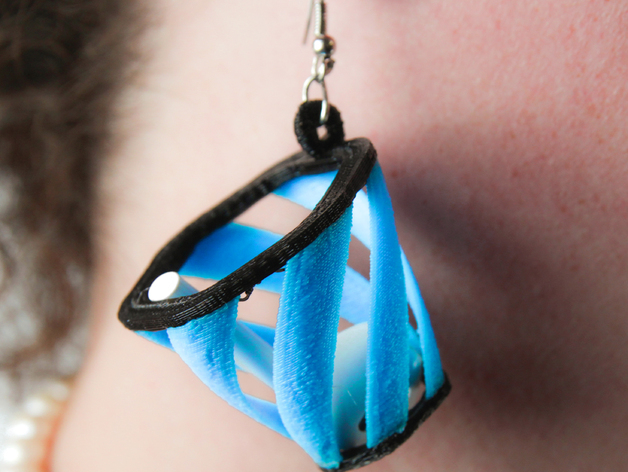 Whilst they don’t speak negatively of the AirPods the whole reason they were able to design the aptly named ‘Twisty Earbud Catchers’ because of it’s poor design. Wireless headphones make sense, wireless earphones don’t because they’re smaller than your pinky finger. The EarBuds make it easier than ever to drop $160 down a drain, or drop them on the bus, or pretty much anywhere because they’re tiny and wireless!

Whilst it’s certainly not going to revolutionise the capabilities of 3D printing it’s another example of how a simple idea can now be transformed into a product almost immediately. And all the files for the Twisty Earbud Catchers are available to download for free so if you’re lucky enough to own a 3D printer and are ridiculous enough to buy some AirPods the catchers can be yours.

Marietta continued, saying: “It’s about rapid reaction. As we’ve gotten better at communication as a species, and can cross ideas across vast distances incredibly quickly, it’s important that we keep up with the production side of things. 3D printing allows for instant realization of ideas. OK, so it’s not quite Star Trek-replicator levels of instant just yet, but it does mean that we can turn around a concept in the same day and make it available to a large number of people. As soon as there’s a need for something, we can fulfill that need. Even if that need is just for AirPod-catching earrings.”

You can make the “Space Oddity” sound wherever you are with the nifty new Dubreq Stylophone inspired by David Bowie.

Want $500 of free recording software? Of course you do.

Pingback: Apple headphones could be on the way, betraying Beats - RouteNote Blog