In the space of a few years CDs have moved to the rear-view mirror and the world is streaming music online, streaming like crazy.

Music streaming is the popular way for people to listen to music all around the world and it has been for years now. In 2016 a report revealed that 50% of music was listened to by streaming it online, and now 2 years later that percentage has shot up by a half to 75%.

Nielsen’s Mid-Year Music Report revealed the figures as the music industry hit’s a record height for revenues since 15 years ago in what they’re calling a music “growth spurt”. According to their report, On-demand music streaming is up a massive 45% with 268 billion songs streamed so far this year. On-demand video streaming also counted towards the figures, for example music videos on YouTube, which is seeing a similarly impressive 35% growth so far in 2018.

So far this year American’s have streamed 403 billion songs across all streaming platform. That’s for only 6 months, and in 2015 Americans streamed almost 100 billion less songs for the whole year. Additionally, in 2015 music streaming accounted for half of the US music revenue meaning that the impact of music streaming is massive on the increasingly booming industry. 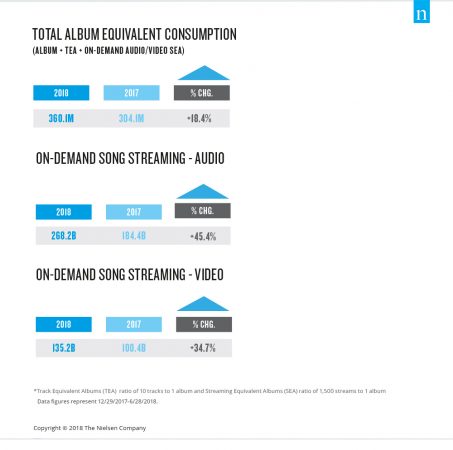 In many places around the world music streaming services are now the place people go to when they want to listen to music. CDs are dying however the physical music market isn’t being wiped out in a disc-shaped genocide as vinyl record sales have been incrementally rising year-on-year as people retain the physical satisfaction side of music with the most romantic listening format.

Facebook have brought music to the Balkans meaning 4 new countries can use music in their Stories, including the music of RouteNote users. Music has been added to Facebook and Instagram in Serbia, Bosnia and…