After revealing the first ever speaker to feature Microsoft’s Cortana AI in December Harman Kardon have shared some more about the Amazon Echo competitor.

Microsoft announced that Cortana, Microsoft’s version of Siri and Alexa, would start being integrated across a bunch of new devices like fridges and toasters last December. The first new integration they revealed was a partnership they had formed with audio developers Harman o for a Cortana powered speaker, and now we know more.

This past week Harman Kardon released a ‘coming soon’ page for the upcoming speaker (since been removed). The page revealed the speaker’s name as Invoke and gave us a better look at its design after the previews in December. Possibly controversially, the new home speaker resembles the Amazon Echo to quite a large extent, with its slightly upward cone shape saving it from looking like a complete replication. 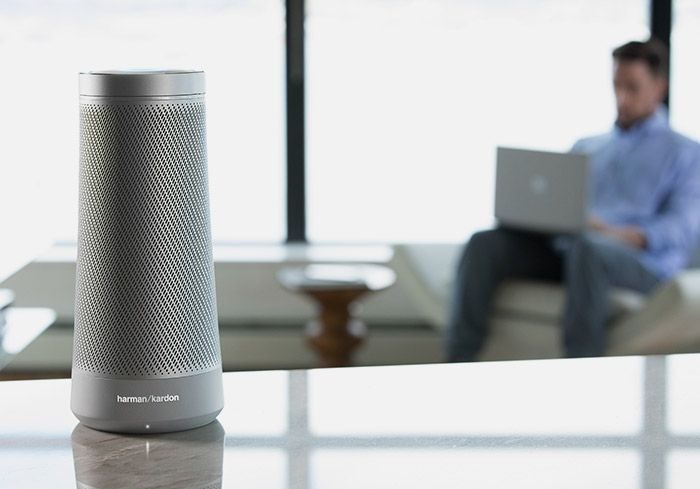 The speaker is capable of 360-degree sounds and can assumably stream music from streaming services like the majority of its rivals. The speaker is also able to make and receive calls on Skype as well as most of Cortana’s usual abilities – like answering questions, keeping your planner, and more. The images show black and silver versions of the Invoke speaker with a small screen top which displays Cortana’s iconic blue ring when active.

Microsoft will be discussing more about Cortana at ‘Build’ where they will likely discuss Invoke and it’s abilities at further length. Neither companies have revealed any information of what price we could expect to be paying to get our hands on an Invoke speaker yet but it will probably be in the same price range of roughly $100-$200 like it’s rivals Google Home and Amazon Echo.

Audiobridge have upped the capabilities on their mobile-only music recording app with 4 new effects available now. Audiobridge is a mobile app that is designed to make collaboration easy from afar. With shared projects users…

Using the power of their good friends Coolaudio, Behringer have access to an incredible new music-making chip. Coolaudio, an analogue and mixed-signal design company working under Behringer, have created an impressive new little piece of…