Spotify have silently launched a new mobile app that is dedicated to exploring and streaming playlists and stations.

Spotify have quietly launched a new app on Android called Stations. The app, called Stations, is an “experiment” according to company that is all about playlists and Spotify stations. They call it “the easiest way to listen to the music you love. Totally free.”

The app features an incredibly simple user interface with the playlists listed in big, bold text and a scroll down menu taking up the top 80% of the screen so you can simply scroll through playlists and stations to find one to play. 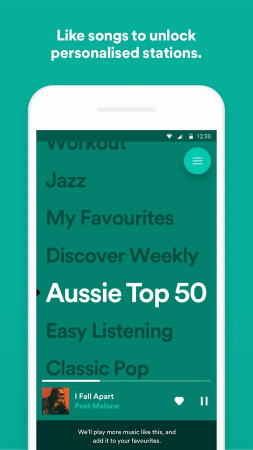 From the settings you can customise which playlists appear on the app’s homepage so you can select your personal favourites to jump into at anytime. At the bottom of the screen is your player which shows what you’re playing with a progress bar.

The minimised player also has pause and heart buttons so you can do either at anytime. Liking or ‘hearting’ songs is a big part of the Stations app as each like unlocks personalised stations that are better refined by your tastes. With the condensed user interface recommendations are important so that you can easily find the playlists and stations you want to hear.

Strangely whether you’re a free listener or a Premium subscriber you won’t be able to skip tracks, so whatever you’re streaming you have to commit or find a new playlist. Among the thousands of curated playlists and custom-made selections Stations also features Spotify’s personalised playlists for you like Discover Weekly and Release Radar.

The app makes it simple to jump straight into listening to a selection of tunes which will appeal to many of the streaming generation. The app is currently in testing and according to The Verge is only available in Australia. Spotify haven’t commented on the app yet.