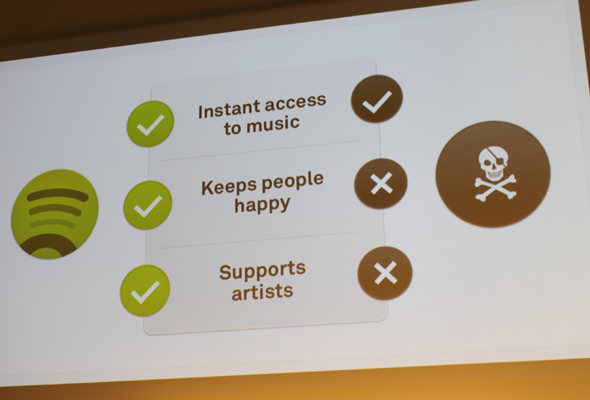 Despite constant criticism studies show that Spotify isn’t reducing record sales and could be helping to combat music piracy.

A lot of controversy surrounds Spotify’s place (and music streaming as a whole) in the music industry. On the one hand they give users access to millions of tracks instantly, the ability to discover music they’ve never heard before and all the while earning revenue for the artists. On the other hand some artists argue the revenue they gain from streaming makes it unsustainable and detracts consumers from an upfront purchase of their music.

Arguments have been thrown back and forth with lots of big name artists making their points however actual evidence to whether Spotify is affecting the industry positively or negatively has been scarce. Now a new study from the European Commission’s Joint Research Centre has set out to put the debate to rest.

Their research showed that for every 137 streams track sales were reduced by unit. Using current revenue statistics where one track sale is worth $0.82 and one stream is worth $0.007 per stream it was worked out the revenues earned from streaming roughly outweigh the losses in sales. The same report also found that every 47 streams led to one less pirated track.

These reports suggest that Spotify isn’t in fact harming the music industry and, if anything, is slightly increasing revenue, opening music up to people who may not have purchased it in the first place. So why is there such an argument against streaming services from certain artists?

Lots of artists find success on Spotify whether that’s through steady revenue from track-plays or boosting their career thanks to being discovered on a service where anyone can find them. Large artists who decry Spotify for it’s small payouts are often losing their earnings through the middle man, their record label.

Some record labels will take a large cut of streaming revenue or even receive money for their catalogue of artists as a whole rather than each artist independently. So music streaming isn’t actually the inherent issue, rather it is the age-old conflict between artist and record label.

Recent years however have seen a surge in independent music, thanks in large part to the global reach of the internet. Before now artists would need to gain a following through word of mouth and work themselves up to a record label signing so that they could be distributed and advertised around the world. Nowadays with websites like SoundCloud and Bandcamp and with digital distributors like RouteNote the artists can put themselves out there without having to sign any contracts.

Hopefully with these studies having come to light the argument that Spotify is hindering rather than helping artists can be put to bed. Hopefully more artists will follow the lead of other artists like deadmau5, Paul McCartney, Skrillex and more who have move towards independent distribution to create an ecosystem that is increasingly fairer and more profitable for the musicians and producers.