Spotify currently boasts 7 million users, all of them in Europe. Not bad for a product that was only released in October 2008 – this figure does only relate to the number of people on their free service, but their £10 a month premium service is also gaining traffic at a remarkable rate; they had “more than 250,000” premium users on 23rd Jan ’10, and are now boasting 320,000 paid subscribers, (as of the 17th March ’10), and increase of 28% in under 3 months, and an extra £8,400,000 a year into the coffers. Spotify still needs to up their percentages though, according to UMG’s [Universal Music Group’s] SVP [Senior Vice President] Rob Wells [and they would know, because they’ve taken shares in the business], they need to have around 10%-12% of their users as premium subscribers [they’re currently at about 5%] to have a viable business in the long term. This might change as more and more advertising dollars go online though – as both Spotify’s CEO Daniel Ek and industry analysts Kantar Media are saying: 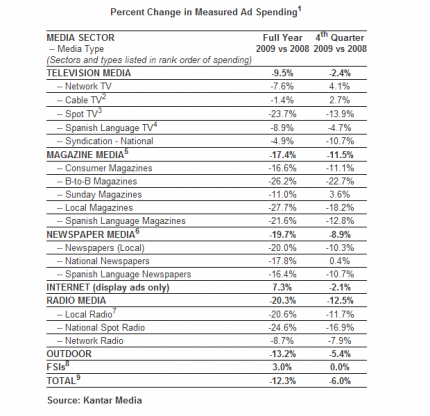 [Table via TechCrunch’s article on the same]. Other interesting facts are that 15% to 18% of the Swedish population use Spotify – and the Swedish music industry’s revenues are up, and that Spotify’s p2p based system is actually using more interwebs than the whole nation of Sweden. There are rumours of a Spotify set-top box and/or home stereo system, a bit like that Sonos thing, but running off your Spotify premium account.

Other signs of Spotify’s ambition came from comments about Apple – Ek described them as having a freemium model like Spotify’s, as everyone (in his opinion) downloads a lot of free stuff and then buys the stuff they really like on iTunes:

“The vast majority of people’s libraries are free from Limewire or trading through friends. And then there’s a small portion of tracks that they’ve bought… I really believe that if music could be legally available on any device that you wanted… I think the music industry would be radically bigger than what it is today”.

He also thinks that Apple will change the way that iTunes works, to allow remote access from anywhere to your iTunes music account on a cloud: “People want to share, to access independently. I think it makes a lot of sense for them to do something in that area.”