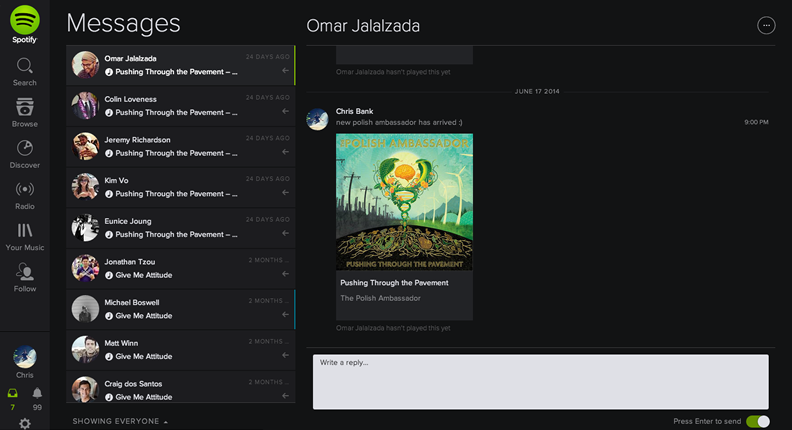 Spotify have revealed that they’re discarding of their messaging features which let users privately message other users through the streaming service.

Spotify have announced through their Community forum that they’re in the process of removing messaging for their streaming platform. The underused feature is being taken down so that, Spotify say, they can focus more time and resources on making their other features even better.

We are currently in the process of deprecating the Inbox/Messages feature within the Spotify app.

Extensive data analysis has shown that this feature has very low engagement. The huge disparity between the use of the feature and the manpower required to maintain it doesn’t merit keeping it running, so we’ve taken the difficult decision to remove it.

In turn, this will allow us to focus our efforts on improving the features we know you do use a lot, as well as work on exciting integrations with all the awesome third-party messaging apps out there.

It’s still very easy to share and chat about music from Spotify. You can check out this support article to discover other ways for getting social.

We’re always trying out innovative ways to use the app, so stay tuned for new sharing features in the future.

If you’re interested to learn more about how the Spotify app evolves, have a look at our article about testing and why features change.

Lastly, we would love it if you could share your feedback about how you share Spotify music with your friends right now, and what social integrations you’d like to see added to the Spotify app, in this thread.

Thanks in advance for bringing your feedback to the Community.

Although as Spotify say, this change won’t affect the majority of Spotify users, those who did make use of the feature have spoken out on how much of an impact the messaging features in Spotify have had on them. One user, for example, responded to the post with a heartfelt story:

I’ve been kinda dating this girl for the last two years and, well, it’s complicated and she recently (hopefully only temporarily) had to move across the country. Over this time we’ve connected on different levels but music was an extremely important one.

We actually had quite different tastes in music but that’s what made finding a song I knew she’d like even more special. Our message thread was essentially a shared musical diary and I cherished the fact that I could go back and queue up the songs we sent each other.

Each song had a place in our relationship. From flirty silly stuff and trying to impress at the beginning, to that one song we both loved on that road trip, to a midnight slow dance, to a shared concert reminder, and a couple other songs that we weren’t quite sure if the other just liked the sound or if we were supposed to take the lyrics to heart.

Those 40-50 songs defined a huge part of our relationship and without that, well, honestly, it probably won’t matter. But with it, it might.