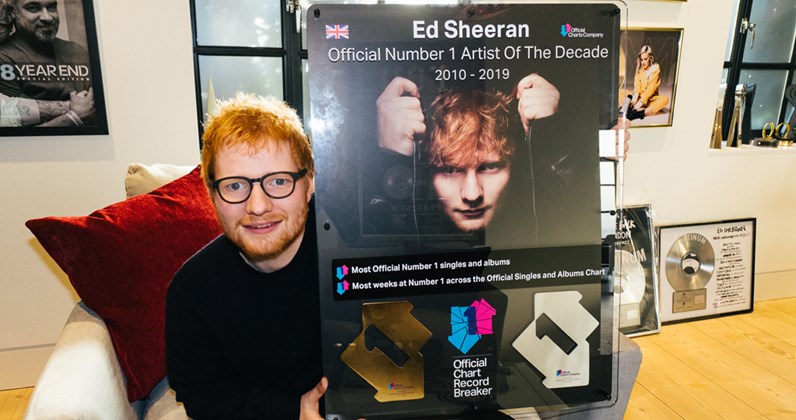 With 2020 just weeks away we get to look back at an entire decade of music and the UK’s top artist has been named.

The Official Charts have revealed their Record Breaker Award in their list of awards for the last decade. British singer-songwriter Ed Sheeran takes the accolade as the Official Number 1 Artist of the Decade in the UK.

Ed Sheeran holds the achievement of Most Number 1s in the Official Singles and Albums chart with 12 Number 1s since 2010. He also has the record for most weeks at Number 1 between 2010-2019 in the UK, equalling the past 79 weeks.

Speaking to Official Charts, Ed Sheeran said: “Thank you to everyone who’s supported me over the past 10 years. Especially my amazing fans. Here’s to the next 10!”

Chief Executive of the Official Charts Company, Martin Talbot said: “Ed has truly dominated this decade and is a worthy recipient of this amazing new award. At the start of the decade, he was a little known (albeit highly rated) young 18-year-old lad from Suffolk – but his catalogue of achievements since then are genuinely remarkable. Today, he is firmly established among the highest levels of global music superstars.”

With a new decade on the way, we have another 10 years of entirely new musicians and artists ahead. A new star will rise and at this time 2029, it could be anyone that we’re writing this about.