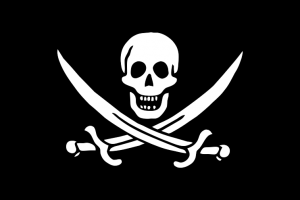 An important trial regarding the illegal online distribution of music in the States has reached the next stage of the argument – there’s no longer much discussion about the fact that duplicating music over the net without rights holders permissions is illegal. Inevitable, perhaps, but certainly a clear violation of intellectual property law. What’s now being put into question is the appropriateness of the massive damages that are being sought by the record labels from individual file sharers.

The amount of lost revenue from a stolen CD is pretty easy to calculate; the shop you take it from loses out on the sticker price, but if that CD is then made available to share over the net, who is responsible for the thousands of copies that may arise on people’s computers? Each individual that makes a copy can (at a stretch) be said to have stolen a product of the same value as the CD, but is the uploader responsible for the actions of the other offenders? Granted, if no-one uploaded the music, you’d be forced to go and buy it if you wanted to listen (assuming it’s not on Spotify or Last.FM of course), but the uploader of a track doesn’t actually make those thousands of copies; they just make it possible for them to be made. A slim distinction perhaps, but an important one; it could be (and is being) argued that ISP’s and torrent tracking/sharing websites are equally complicit in these piratical crimes. If this is the case, is it right to bring down the hammer of justice so hard on the single individuals that are caught and prosecuted? A lottery of punishment that victimises the few for the crimes of the many doesn’t seem a just way of combatting piracy…

Part of the motion that Tenenbaum’s lawyer’s have filed with the District Court of Massachussets, quotes a precedent from the US Supreme Court; “few awards exceeding a single-digit ratio between punitive and compensatory damages, to a significant degree, will satisfy due process.” Compensatory damages being the direct making-up-for-loss costs, and punitive damages the deterrent. To fall in line with that Supreme Court ruling, the direct damage Tenenbaum caused would have to be the equivalent of stealing $75,000 worth of music (at a 9x multiplier), and Jammie Thomas would have had to have left the record shop with $213,000 worth of CD’s in his backpack! Whatever the result of the retrial request, it seems somewhat academic in the specific case, as I can’t imagine a student can lay his hands on $675,000 to pay the damages.

‘Behind the Songs’ is the new hub, full of radio shows, playlists and video series, showcasing songwriters, producers and session musicians.