Akai Professional have announced their latest instrument in it’s MPC series, a controller with a built in touch screen.

With the MPC Touch you get a professional piece of production gear combined with the ease and intuition of using a smartphone or tablet. According to Akai the MPC Touch will “(forever change) how producers interact with all aspects of their sound.”

The controller isn’t just a touch screen though and comes with the staple MPC sound, quality design and newly improved pads. A representative from Akai said: “(The pads are) far superior to existing MPC hardware They’re much more sensitive and very playable, akin to the new MPD line of MIDI controllers as they follow a similar lineage.”

The MPC Touch also comes bundled with a massive collection of over 20,000 sounds in a range of styles from elit content providers, including: Prime Loops, Sonivox, MVP Loops, Toolroom, CR2, AIR and more. 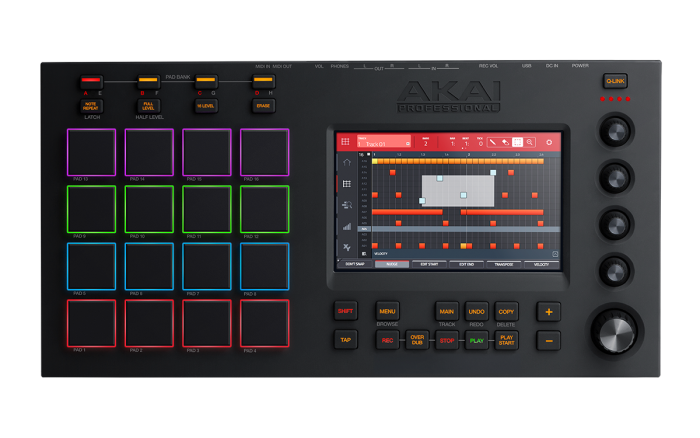 Akai went into detail about the in-built step sequencer and their new XYFX feature, saying:

The MPC Touch has a new independent track length feature which combined with the new step sequencer is something truly special. You can set any track to a different length in realtime doing this from the step sequencer gives an MPC user the potential to work in new ways.

In the Step Sequencer you can enter or remove steps with either the pads or on the TUI via the note steps beneath the velocity sliders, you can use the TUI to adjust the velocity of any step. Dragging your finger across the screen allows you to draw in velocity patterns, you can nudge the pattern with the onscreen ‘nudge’. There’s also an overall slider for trimming the velocity of all steps and section with preset shapes.

The gestural editing and tweaking via the TUI combined with the traditional pads makes the creation of drum parts way easier than your traditional drum machine step sequencer where things like tweaking velocities is a slow process.

The XYFX are a range of realtime gestural effects. You can instantiate an XYFX on any drum or instrument program with one touch and get straight into using the XY pad to mangle the incoming audio. There is a full screen view and a smaller view which contains the preset menu and controls for the touch envelope which crossfades between the dry and wet signal from the effect. It has a wide range of tempo synchronised and manual effects e.g. beat repeat variants and LFO modulated filters.

You can have as many instances of the XYFX as you have programs! And they can be automated into the sequencer.

So here’s a breakdown of the features that come with the revolutionary new MPC Touch:

Unfortunately the MPC Touch still requires a PC or Mac to use but the touch screen still adds loads more functionality using just your fingers and controller.

You can read more about the MPC Touch on the Akai website. It will be available in November for £499.

You can see the MPC Touch in use with Grammy-award winning, multi-platinum producer Needlz below.

What are the different types of reverb? A guide

Starting to explore reverb effects as a beginner producer? Let’s look at the different types of reverb you might come across in your producing.

How to listen to Apple Music in up to 24-bit/192 kHz – the best DAC, headphones and speakers for hi-res lossless audio

While Dolby Atmos spatial audio is compatible on most of Apple and Beats speakers and headphones, lossless audio is a different story.