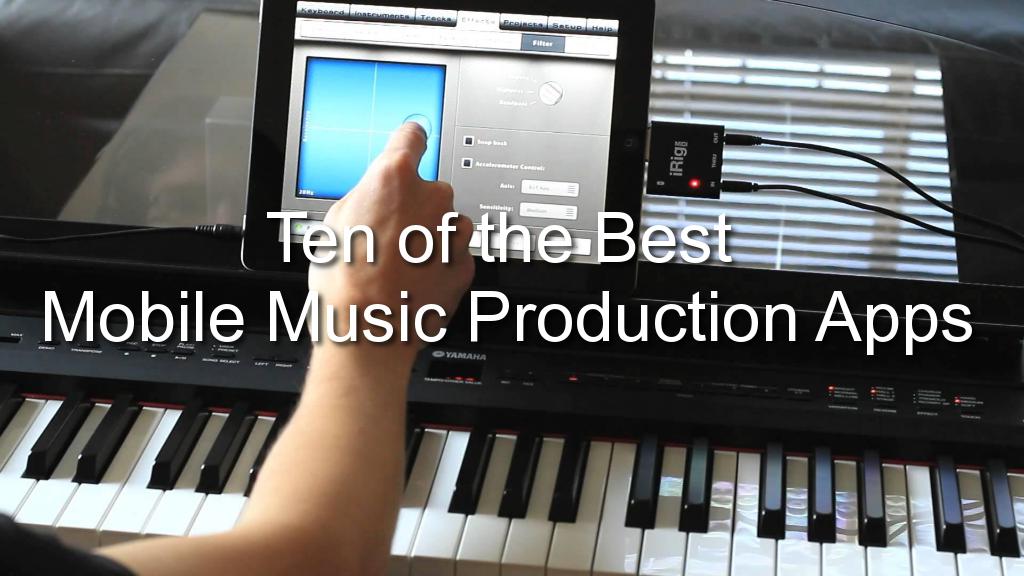 As a musician you’ve probably been in the position where you have the urge to record something as inspiration suddenly strikes but you’re in the middle of nowhere, away from all of your recording equipment, distanced from your computer and expensive software. Or how about those times when you need to get that idea down and waiting for your computer to boot up and load your hefty DAW won’t cut it.

In the 21st century a lot of you will have a smartphone or tablet on your person most of the time and guess what? With the right app, your mobile device can be transformed into the most portable music-maker you’ll find.

We’ve compiled a list of 10 great DAWs (Digital Audio Workstations) and sequencers that not only let you record and create on the go but also give you the tools to fine tune your tracks to perfection with professional, and some great amateur, production software.

Image-Line already have renown for their great desktop DAW FL Studio. Their mobile version shares the intuitive and well designed notation input of it’s desktop peer. Using the built in piano roll on a bunch of various and editable sample-based instruments you can create a wide range of sounds.

Since it’s release Image-Line have been frequently updating the app with new features including audio tracks, so you can import and edit various audio files. Though it of course pales in comparison to the desktop version of FL Studio, the mobile variant still provides you with a fully fleshed, multi-track DAW to take with you on-the-go.

Image-Line are set to release the third major version of their mobile app soon: routenote.com/blog/fl-studio-mobile-3-coming-soon

Steinberg are probably the biggest name in music production software – whether you like their famed Cubase program or not. Their iOS variant Cubasis makes the power of Cubase portable. A streamlined sequencer with multi-touch compatibility using Cubasis you can record, edit and mix your projects easily.

With unlimited audio and MIDI tracks (we have no idea how) and a bunch of effects, instruments and loops to use Cubasis has plenty of creative potential. Add to that it’s extensive recording and editing capabilities and this is one of the best DAWs outside of a computer. You can also share projects between your desktop version and iOS app so no project is left behind.

Apple’s staple in music-making software – GarageBand has been around for over 10 years in various iterations, beginning on Mac OS. These days the software is available on your iOS devices for whenever that creative mood hits.

Garageband offers great functionality through it’s built-in Touch and Smart instruments so you can record a variety of sounds directly into the app. With up to 32 tracks available you can record your instruments with MIDI and jack converters too. Featuring built in guitar amps, effects and a sequencer GarageBand is a great all round music production application. GarageBand also allows transfers from their new Music Memos app for super simple recording on the fly.

SunVox isn’t the most appealing of mobile music production apps but it does something very unique – it works on Windows phones! It is actually compatible on most OS’s both mobile and desktop.

SunVox is a pattern-based sequencer and modular synthesizer and once you get past it’s striking visuals has plenty to offer. The application supports a variety of inputs depending on what OS you are using and features real-time recording, MIDI import/exports and more. Although it’s one of the few DAWs to work on Windows phones it’s features are still very limited on the device.

Lemus is a professional MIDI and OSC controller application that makes it easy to create all kinds of sequences whilst you’re out-and-about. The app features a deep sequencer with which you can control MIDI instruments. One of Lemur’s best features is it’s great multi-touch functionality.

With the new Canvas feature in Lemur you can script custom widgets within the app from a HTML5 element. On top of it’s great features you can customise the ‘Skins’ of Lemur so that it looks however you want it to look.

TouchDAW is a feature-packed DAW and MIDI control app for Android. It features multi-touch compatible launchpads and keyboard, MIDI controllers and incredibly impressive mixing capabilities. Seriously, this is the one we recommend if you want in-depth mixing of individual track parameters on your Android tablet or smartphone.

One of this apps major features is it’s compatibility with desktop DAWs, allowing you to use it as a separate mixer or synthesiser whilst you work on your project which is not only really cool but incredibly useful. Although this app is exclusive to Android it’s files are compatible on iOS and Windows phones.

Inspired by rack-mount synthesizers this neat little app lets you create racks of up to 14 built-in machines. You can then sequence and create your tracks using the variety of digitised synthesisers which you can apply up to 2 effects on each out of 16 effect types.

With Caustic you can also insert certain USB MIDI controllers on compatible devices so they you’re really playing your recordings. Though not the most diverse, feature packed recording app it’s great for laying your ideas down and even greater if you love synthesisers. For what it is, words don’t do it enough justice so check it out in the video below.

After a gruelling search this was as good as I could find for the underpowered Windows phones (excluding SunVox). It may not be a DAW but it’s a pretty well realised sequencer (aptly titled – yes) with variable track lengths of up to 128 steps, 70 samples, 3 oscillator wavetable synthesizers and 35 synthesizer presets.

That’s not all with a 7 channel mixer, loop settings and various adjustable features Sequencer is the easiest (and one of the only) ways to create great beats on your Windows phone and best of all – it’s free!

NanoStudio is a fully fleshed out “recording studio” for your iOS device. With virtual analogue synths, sample trigger pads, impressive sequencer, sample editor, a mixer, loads of effects and more. All in one app!

Lay out and record any ideas in real time and make them sound exactly how you want. It may take a little practice to get used to simply because of it’s massive set of features. The downside – you can’t record audio but an app that handles six MIDI instruments is good enough. The app also supports Audiobus and exports to SoundCloud.

Have we saved the best until last? Well that’s subjective and I won’t force an opinion on you but Akai Professional’s iMPC Pro brings together a gorgeously simple yet intuitive aesthetic with a massive set of music recording and editing functions. The fact alone that it’s a 64-track music production app for your iPad is impressive enough as it is but iMPC Pro provides so much more.

Based on Akai’s MPC series this app provides LOADS of composing, editing and mixing features to aid you from start to finish of your tracks. A massive library of sounds, instinctive sample editing, drum pads, hundreds of editing capabilities from effects, levels, trimming, splicing, timing, tuning, panning and so, so much more. Unfortunately iMPC Pro is iPad only but for those lucky iPad owners this is a music production app you do not want to miss.

It’s worth noting the differences in iOS, Android and Windows smartphones when it comes to mobile music-making. You may have noticed the list tends to lean towards iOS compatibility and definitely doesn’t favour Windows phones. Well there’s a reason for this.

Windows phones generally don’t have the power or compatibility to work with proper DAWs and therefore shouldn’t be your first choice, however there a couple of inclusions for those Windows users who want to make do.

Android is a big step up and features a wide-variety of music-making applications however the vast difference in specs between models of Android phones leaves a little ambiguity for compatibility and means you may not get the best results, but there’s still bound to be something for you.

Lastly iOS devices are generally considered the best mobile platform if you want to properly record, mix and edit tracks on the go. From the way they handle audio files to it’s ability to cope with all the various functions of a DAW iOS is for the most part the preferable choice. iPad’s are definitely the top dog for it’s large screen, increased processing power and it’s excellent exclusive apps.

But no matter what your operating system, there will be something for you (even if that’s a little something for Windows users), so get out there and start making music!