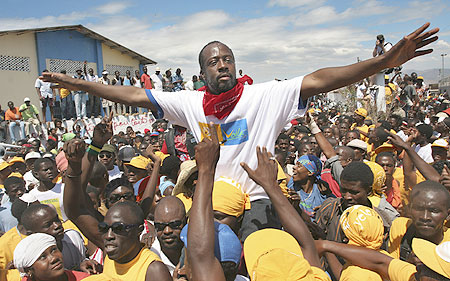 Wyclef Jean has registered as a presidential contender in Haiti. He filed papers at the electoral council to run as a candidate for the Viv Ansanm (Live Together) political party, as excited young supporters clad in white and red T-shirts emblazoned with the words “Fas a Fas,” the party’s youth movement, packed the surrounding streets.

“I would like to tell President Barack Obama that the United States has Obama and Haiti has Wyclef Jean,” the three-time Grammy award-winner told cheering supporters in a downtown area of Port-au-Prince.

“If his candidacy is approved, I think he’s going to be the next president,” said Saurel Magloire, who was among those gathered outside the electoral council.