Vox are scaling down, on size not quality, revealing a bunch of new speakers that are small enough to stash in your bag and still powerful enough to melt some faces.

Vox have announced 3 new ranges of gorgeous speakers and amps for musicians and music fans alike to drool over. The new line-up features mini guitar and bass amps packed with great sound and effects, portable amps packed with sound and functionality, and finally Vox have unveiled their very own AC30 old-school radio.

The retro radio from Vox brings back the old-school portable AM/FM boxes of old with a Vox AC30 amp design to beautify it. It may seem a little outdated but what’s the point in going for the retro look if you’re only doing half measures. The all-in-one radio/speaker does however feature an aux input and output so you can play your own music through it and listen through headphones.

The radio has two 3″ speakers which are capable of a 2W output and can run on 6 AA batteries if you want to make it portable. The Vox radio also features a clock function with an alarm so it makes the perfect retro-chic bedside radio for you hipsters out there, and guitar fanatics. At £65 it’s not too bad a snatch, though without digital radio it may not be the next Roberts.

Next are Vox’s new mini amps for guitars and basses which offer portable playing at an unbeatable price of £59. The design for the AC2 RhythmVOX amps again follows that traditional AC30 look on a small-scale. Vox are so proud of their mini amps’ appearance that they say it “looks so much like a real Vox amp that you’ll forget it’s a miniature”. 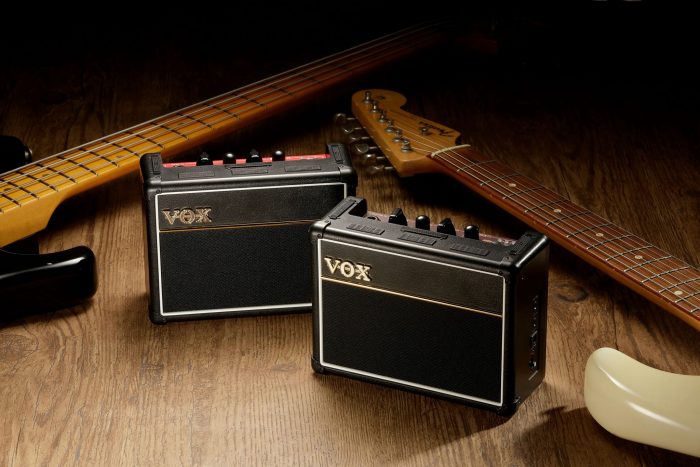 For cheap, portable instrument amplifiers the AC2 RhythmVOX amps come with a surprising amount of range and customisation. The amps are capable of three amp sounds – clean, crunch and lead, come with five effects like chorus, delay and reverb, as well as a massive 81 rhythm patterns. The amps also have an in-built tuner as well as aux input and outputs like the radio, and features 20 hours worth of portable playtime when AA battery-powered.

Finally in their new range is a higher end option in the shape of their Adio Air GT and BS amps for guitar and bass. These amps pack much more power despite the similar size with a 50W output coming from their 2×3 speaker. As well as a whole lot more sound the Adio range comes packed with extra features like 19 effects and a load of amp models (23 on the GT and 17 on the BS).

Vox’s Adio amps feature Bluetooth for a host of functionality such as streaming music and controlling the settings wirelessly with Bluetooth MIDI. The amp can be connected to computers via USB for direct recording, and offer three different routings, while Vox’s JamVOX III and Tone Room software are included for setting tweaks and storage.

Other nifty features include Acoustage for surround-sound effects; an audio EQ with Bassilator circuit for rich low-end; noise-reduction on high-gain sounds; and an auto-tuner with support for dropped tunings. Once again the Adio can also be taken on the go with 8 hours of life from 8 AA batteries.

With a design like a mix between a Gucci designed bluetooth speaker and a cabinet head the Adio may not appeal to everyone but it’s certainly the most unique looking of their new miniature ranges. At £279 the price tag is quite a bit higher for the Adio’s but for a quality portable amplifier for guitar and bass it seems reasonable.

Vox’s Adio amps will be available from June whilst the radio and mini AC30 amps will both be released sometime in August.

Work faster and more efficiently in your DAW by getting used to shortcut keys in FL Studio.

The new Windows and Mac software from RØDE allows you to record up to four NT-USB Mini microphones simultaneously.