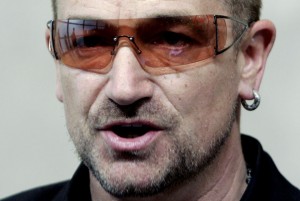 U2 appear to have hinted that they may be set to appear at next year’s Glastonbury festival in Somerset.

On Friday (October 1), the Irish band took the unusual step of informing fans on their website that tickets were set to go on sale for the event. The band added “Looking at the tour dates – there is a gap in the band’s schedule ahead of the East Lansing show on June 26th which would make the Friday night a possibility.”

This could be a possible upset again, with a too premature announcement for Glasto potentially upsetting fans again after U2 were due to headline this year’s festival but were forced to pull out when singer Bono injured his back during rehearsals. This is the Official reason that was released, quashing any rumours that the band had a hand in helping ticket sales increase by pulling out after pressure from the organiser’s because they were “struggling” to sell tickets in the volume they’re used to.

The band’s manager Paul McGuiness said: “We’re certainly excited about our plans for next year. Watch this space.”

Tickets for next year’s Glastonbury festival sold out in less than five hours on Sunday (October 3). The festival will take place from June 24-26. Without revealing the other potential head-liners event organiser Michael Eavis has confirmed that all have in fact been booked.