Sonos have announced the ‘PLAYBASE’, a brand new speaker from the WiFi speaker creators that goes under your TV set like a soundbar.

Late last month a leak suggested that a new Sonos speaker was on the way, that would sit under your TV for unmounted TV’s. Now Sonos have revealed the speaker, named ‘PLAYBASE’, that connects up to your TV and any other Sonos speakers to offer a new level of sound from your television.

Typical soundbars work best when wall-mounted directly below a TV. Truth is, most TVs end up on stands and furniture – exactly what PLAYBASE was created for. Its low profile design practically vanishes beneath your TV, yet it fills your entire viewing room with epic home cinema audio.

Feel the heart and soul of your movies and music

Search instantly through all your music services to find the songs you love, set them to play in different rooms, and adjust the volume and other settings for each room. Sonos plays it all: popular streaming services, free internet radio, podcasts, audiobooks, your go-to collection of downloads – whatever you love to listen to.

Unfortunately for some audiophiles the PLAYBASE uses Dolby Digital instead of DTS multichannel audio for their surround sound. Sonos explained this decision, as a spokesperson said:

For home entertainment, DTS content is only found on physical media such as DVD, Blu-ray and Laserdisc – no video streaming services such as Netflix or Hulu support DTS. Sonos is focussed on modern listeners who predominantly stream and because most physical discs encode DTS at bit rates substantially similar to Dolby Digital, we have decided to not support DTS on Playbase as we don’t believe it offers a better listening experience for the majority of owners. 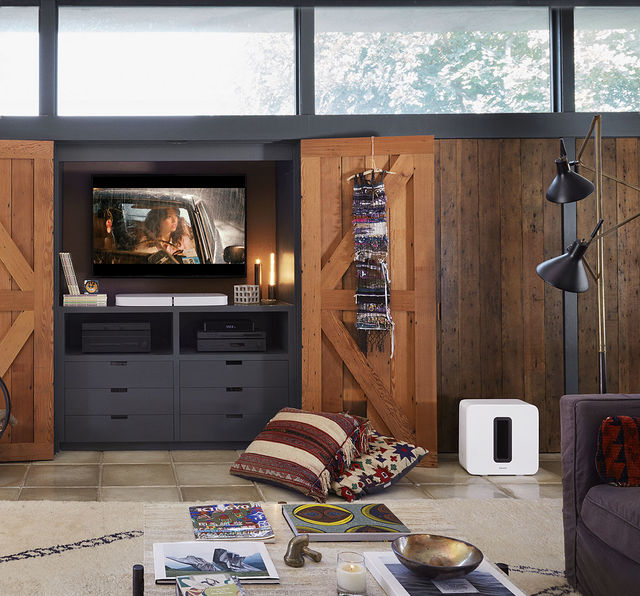 With only three ports, for ethernet, optical audio and power input, wired audio is unfortunately limited to optical. The Sonos spokesperson also explained this decision, saying: “While newer HDMI standards such as HDMI ARC and CEC promise increased control functionality, they are unlikely to be found on TVs that are several years old and are still implemented in a fragmented way across newer TV models. We continue to monitor the state of HDMI audio implementations in the market for future roadmap products.”

Whilst Sonos have built the PLAYBASE to go under or in front of the TV, their long-standing PLAYBAR is Sonos’ recommended choice when it comes to which soundbar to use with wall-mounted TVs. PLAYBASE is capable of supporting TVs that weigh up to 77 lbs.

You can pre-order the Sonos PLAYBASE right now if you’re an existing Sonos customer with it’s release date expected on the 4th April.

Are YouTube Premium users being scammed? Here’s exactly what changes are coming to the YouTube Music free app.

Is iTunes the same as Apple Music?

Confused? Let’s clear up the difference between iTunes and Apple Music.

Pingback: The Sonos Beam makes your TV sound a dream and is out now - RouteNote Blog