N-Track’s mobile version of their great desktop DAW puts a fully fleshed out music creation, recording and editing studio within the palm of your hand.

In recent years we’ve seen mobile technology advance to incredible levels with more power than 5 year old computers being put into some modern mobile phones. As the technology has become more sophisticated the possibilities have spiralled with enough power to run full Digital Audio Workstations in your phone. N-Track Studio 8 Pro for mobile takes full advantage of this power to offer one of the fullest DAW’s to ever grace your mobile screen.

On first use N-Track mobile can seem overwhelming, and that’s because it is but only because the software goes so deep that you have a wealth of quality tools for making and editing music. From when you first open the app you’re presented with a number of options for creating the first track in your composition. 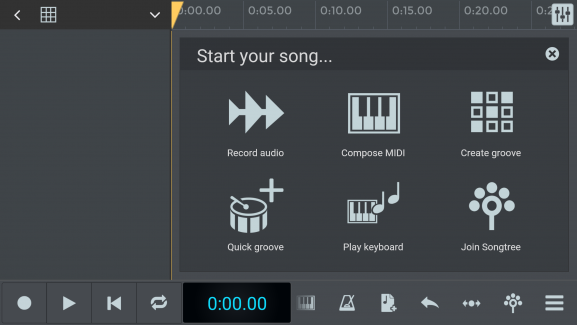 You can jump straight in and create a simple groove for the skeleton of the track, open up the MIDI keyboard and start playing from their massive selection of in-built MIDI instruments.
There is even a ‘Quick Groove’ option that offers a 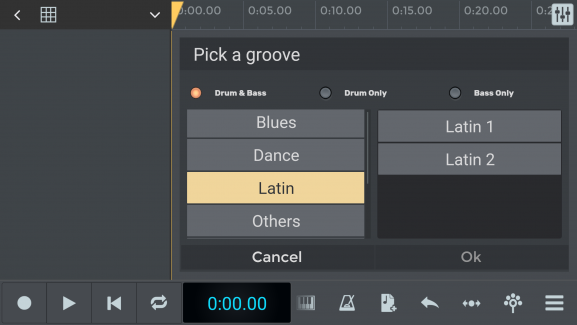 great selection of genre presets for drums, bass or both so you have an instant backing for your creations. Select from Latin, Reggae, Dance and more to get into the groove.

With so many options for creating your tracks it doesn’t just offer you a variety of music making methods to let loose your creativity through but also means users at different skill levels can use the software. For example a beginner can select a groove, loop it and play along with the MIDI keyboard whilst a Pro can create a drum track with the sequencer, record vocals, add multilayered tracks and express themselves the same as they could on a desktop DAW. 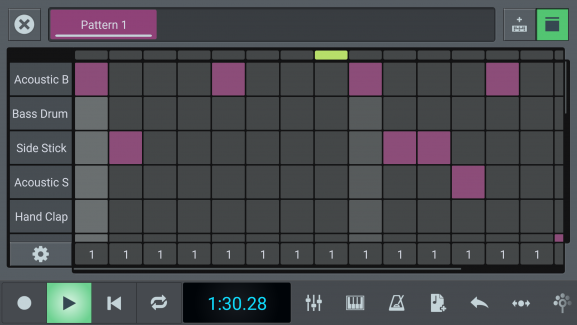 Their new built-in sequencer works fantastically to make it easy to programme tracks.
The sequencer allows you to create multiple patterns and order them how you want, or just loop them throughout the entire track. The sequencer doesn’t just work with drums however and plays pretty much all of the instruments so you can loop a bassline for your track or create a guitar solo note by note. Whilst inputting MIDI tracks manually is also possible the MIDI editing and input screen can be small and fiddly, especially on smaller devices, but of course it provides a lot more detail to your MIDI sequence.

The built-in keyboard works as well as you’d want a touch keyboard to function which of course isn’t ideal but gives you all you need to play melodies. The keyboard also features 3 views for full screen, partial screen or split screen with another keyboard that you can put a different instrument on or just use to extend the keyboards range. 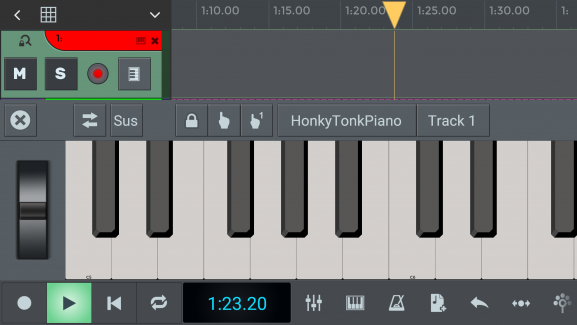 N-Track also features compatibility with a bunch of different external interfaces so with an adaptor you can plug some of your favourite tools in to record professional vocals, add some live instrumentation, or plug your MIDI keyboard in and groove away. With so many recording options anyone can create music with N-Track and create a simple beat or a full blown composition, thanks to N-Tracks brilliantly deep user interface.

This is where I was most impressed with N-Track Studio’s mobile app, the amount of editing tools available are incredible. With the tracks laid out in front of you can intuitively move, crop, copy and paste any segment or entire tracks. Drag the end of your track to the right and it will automatically start extending the track starting from the beginning of the composition, it’s just so easy to edit.

Often with mobile DAWs, even with one’s based off of desktop versions, 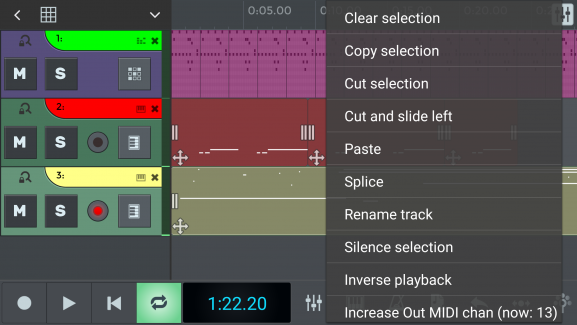 there is a loss of features thanks to a scaled down interface with limited control options. But with N-Track everything has been intuitively designed so that the interface isn’t crowded but still gives you ultimate control over your music.
By holding your finger down you can open up a ‘Right Click Menu’ full of options for your tracks such as splicing, renaming the track, copy, cut, paste, choose your outputs and so much more.

Even the EQ feels like a full computer version with a real-time waveform that allows you edit the EQ by adding/removing wavepoints and putting them wherever you want to get the perfect sound. 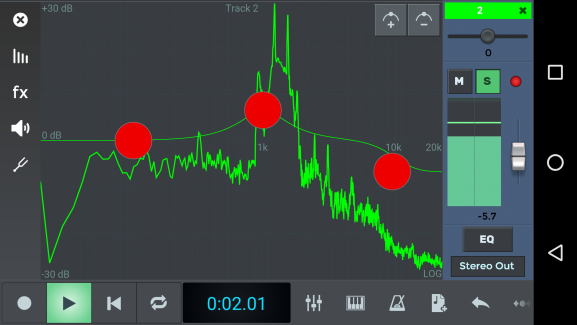 N-Track is loaded with customisation options so that you can really delve deep into your track like never before on a mobile device. Again this can seem overwhelming to new users of the app but all these extra editing features are hidden so that you don’t even need to see them unless you want to use them. And once you’ve got to grips with the software you can truly appreciate the potential within this app.

There are a number of effects that come with N-Track Studio 8 Mobile Pro and each has it’s own editable parameters and presets. There isn’t a mass of choice but it includes all the basics like Chorus, Delay, Tremolo and more. Whilst the choice is limited each effect can be edited to the point where you can create completely disparate sounds with just one effect. 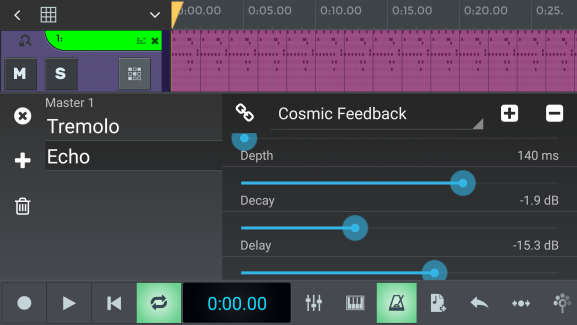 Although it works on most iOS and Android devices you’re going to want a fairly new device to run it or else you’ll come across lagging and crashing. Whilst it worked perfectly on my Samsung Galaxy S6 it had a lot of problems on my Nexus 7 tablet. This is due to simply how packed the app and how intensive music apps are generally, especially multi-track DAWs. Whilst it’s full of features, the app is surprisingly efficient on storage space, taking up less than 100mb on Android. 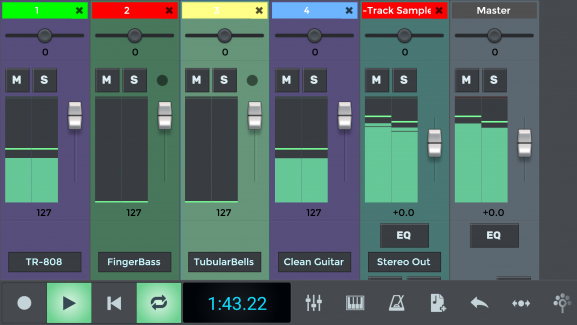 Additionally whilst it’s compatible with phones and tablets you’re going to get a much better experience the bigger the screen you’re on. Don’t get me wrong the app is still completely functional on smartphones it just makes deep editing and complex creation harder, although most of the app can be zoomed in on so you can choose your perspective.

N-Track Studio 8 Pro Mobile has even more to offer than I’ve covered and is truly a spectacular DAW for mobile music makers. The level of customisation and creation puts it on par with many full DAWs for desktops and as long as you have a phone powerful enough gives you the tools to create full complex tracks, or just play around with sequencing – the options are all there.

You can try N-Track Studio 8 Mobile for free on iOS and Android and if you enjoy it you can buy the full Pro version with all the features and unlimited tracks for $29.99 or a monthly subscription of $1.99.

You can find out more about N-Track Studio and take a look at the desktop version from their website here: en.ntrack.com

Steinberg’s Nuendo DAW is the younger software sibling of Cubase, and Nuendo 12 has a very clear focus on speed production for different media applications.

Pingback: The Top 10 DAWs for music production in 2017 - RouteNote Blog