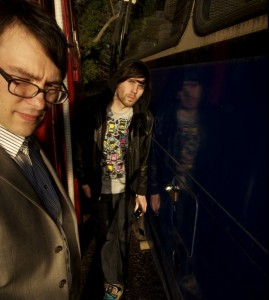 Jackanory and the Ball’s creatively titled The. E.P is one of the most compelling and complete records from a new artist that I’ve listened to in quite some time.
The duo consists of producer and general urban magician Michael Rendall aka Jackanory, and Bath born M.C and singer Tom Skelton aka Ball. Both have relatively decorated musical pasts, of which you can find more about on their website.
This E.P is the result of something that began as a passion project. The record is aiming to create a legitimate and credible cross between Hip Hop, Jazz, Pop, Soul and anything else that they happen to have been inspired by.

I’ve been aware of these two for a long time now and first heard some of the tracks featured on this E.P around 3 years ago. This is actually the source of my only complaint with this record – recycling of very old material, but it shouldn’t affect first time listeners in anyway whatsoever.

Opening the E.P is a song I plugged in a blog earlier this week. ‘Audio Precision’ is a perfect introduction to the band, it’s fun, has a great opening and is superbly produced. When I first heard it I thought it was probably what Lily Allen would sound like if she and her entire band had a car crash with DJ Shadow and his record collection.
It’s actually not that typical stylistically of the rest of the record or from what I’ve heard in live shows the rest of their material, but it’s so damn catchy you’ll probably not be able to stop listening to it for about a week.

Next up is another brilliantly produced number ‘Not The One’. This song has one of the smoothest swing rhythms you’re likely to hear from a British act which is complimented throughout the song by some excellent and perfectly timed tight, rhythmic punches. The verses are possibly a little to full in this song and I would have liked to have heard them stripped down to just bass, drums and piano. Half way through the first verse an organ of some description crashes in with a staccato quaver rhythm that totally drowns out and negates the excellent swing I earlier championed. This is however made up for by some seriously slick musicianship in the second verse.

The standout song is by some distance the E.P’s sign off ‘Come Away With Me’, which feels the most authentic as both a Hip-Hop and Soul track. It’s in this song we best hear the versatility of Ball’s voice, intimately rhyming into our ears in the verses before soaring atop the elegant musical arrangement for the chorus.

This is honestly a great record and I strongly urge you all to listen to it now by scrolling down, then download it for free by clicking here. You can find out everything you need to know about the band by visiting their website. A full album will be released soon and they will be gigging throughout the year.

If you would like to be reviewed then please get in touch; luke@routenote.com or on twitter @monkeyhotel

Jackanory & The Ball by Jackanory and the Ball