A new Sponsored Content setting has appeared on Spotify confirming rumours that labels can pay for plays on the platform soon.

This week an option to opt-out of “Sponsored Content” was found on Spotify. With rumours recently that Spotify would introduce payable promotion on their music streaming platform, Spotify have now confirmed they are testing a pay for plays system.

A spokesperson told TechCrunch that their “Sponsored Song” promotion opportunity is “a product test for labels to promote singles on the free tier”. Rather than popping up like an advertisement Sponsored Songs allows record labels to pay for songs to appear in certain influential playlists – a major source of plays and popularity.

Spotify’s sponsored song’s can be targeted so that they appear in playlists for users with matching tastes, so that they don’t appear out of place in a playlist. Whilst these tracks will be shown separately from the playlist’s actual tracklist it will be instantly playable from the screen you first see it, not requiring an ad click.

Thankfully it’s not as invasive as many worried it could be, with pay for plays suggesting songs would be placed into playlists for payment. In fact it appears that Sponsored Songs are just targeted, musical advertisements and don’t get in the way of your playlist-listening at all – unless you can’t handle having to scroll an extra CM to see the next track in your playlist. 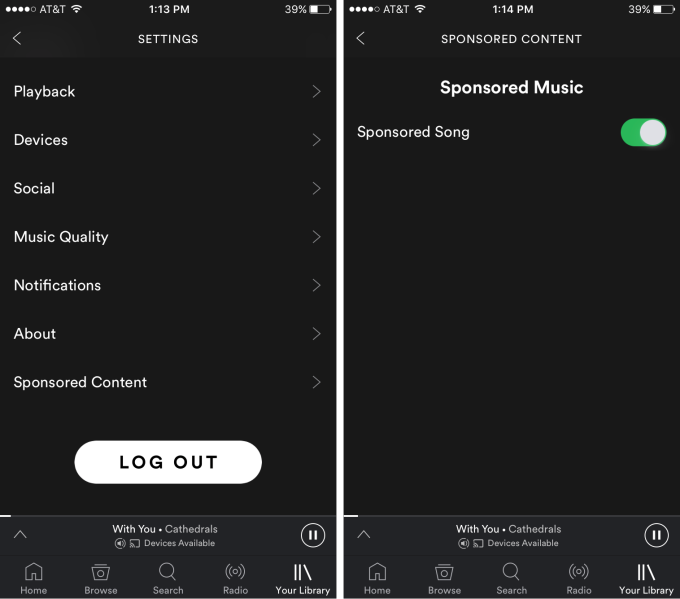 One of Spotify’s biggest criticism’s during it’s lifespan has been it’s ad-supported, free tier which allows users to sign up and listen to unlimited music for free (interspersed with adverts). Spotify have been making an effort to promote Spotify Premium more to get more users paying for music streaming, which seems to have been working with record rises in subscribers.

Having recently reached 140m monthly active users Spotify are now looking to make their free platform more profitable. Responses will have to be seen to their new paid promotion opportunity, but it currently seems like unobtrusive way of making more money on free streaming whilst also giving labels a unique chance to push new music.

Playlists have been monetised before by Spotify, last year allowing businesses to sponsor their most popular playlists. Sponsoring a playlist allows companies to pay to add a logo to the top of the playlist and show video adverts that can be watched for 30 minutes of ad-free listening. Another unique way of making their free platform more viable for the industry.