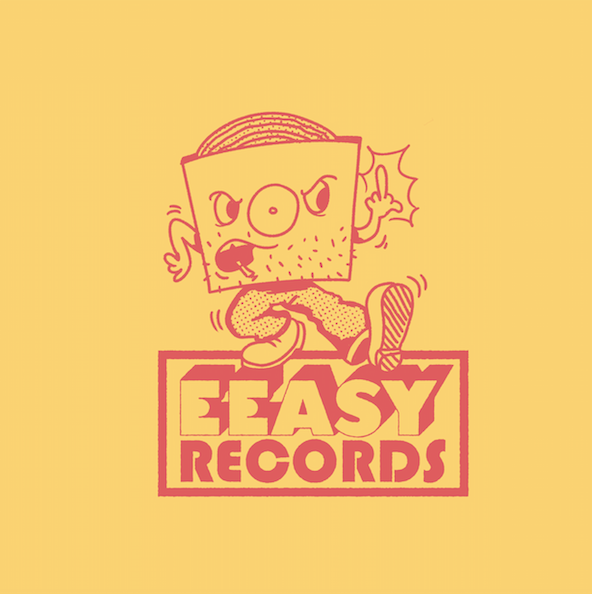 We chatted to Charlie Wyatt, founder of Leeds based Eeasy Records. Charlie gives us two sides of the story, one from a bands perspective and the other as a label owner.

The ‘DIY Till We Die’ article series has so far given us the perspective of DIY artists and more recently DIY labels. The second part of this article series aims to give us a look into life in the DIY label, a fly on the wall experience to their experiences, positive and negative. This weeks interview is with Charlie Wyatt, a prolific member of Leeds’s underground rock scene, of which is own band Thee MVPs are apart of. Charlie has seen both sides of the coin, as a DIY band and now as a DIY label owner.

We chat to him about how and why he set Eeasy Records up, the ups and downs and much more!

Thanks for taking the time to chat to us! How have you been and how has lockdown 3.0 been?

Charlie: I’ve been about as ok and as not ok as everyone else during all this really. I’m lucky I have a job that hasn’t been affected too much by the pandemic. I had some accidental foresight to switch careers about a month before lockdown. Which was great because I worked in events!

So, what was the influence behind Eeasy Records and why did you start the label?

Charlie: Oh you know. All the classic reasons someone with an unpopular band wants to start up something. You want to give off the air of having part of the machine giving a hoot about you. All the obvious and usual labels are an influence to me… in the red, goner, sst, au go go, discord etc.

There was an unpleasant and unfortunate situation that meant my bands LP (mvps -science fiction, please order one lol) wasn’t likely to land on a ‘bigger’ label and through my own stubbornness I knew I’d be doing a better job at releasing and promoting my record than friends who had approached us about doing it. Not that I’m meaning to disrespect those folks, you have to understand that I was booking, PRing, putting on shows already, we’ve toured America 4 times and Europe twice off the back of some outdated 45 singles so I think we got by ok without an LP. Running a label seemed like a logical step that also had the perks of facilitating the releases of my own music.

Was the idea always to be DIY?

Charlie: Not really. I’d bloody love to have people working for me but that’s just not realistic and completely ego driven. The older I get the more I don’t really buy into the DIY ethos. I think lazy people appropriate the tag and attach It to their not very successful releases/shows etc. The amount of times I had to ‘be ok’ with not even getting gas money for a gig and also have to go say thanks to a towns old guard scene head who put on a dead show has always rubbed me the wrong way. I hate the idea that people think because they had the tiniest bit of initiative to start a label they automatically thought everyone would come flocking, but they don’t. Work for your labels and bands and the audience will return it.

All the people I look up to like Ian Mackaye (dischord), Jacob Bannon (deathwish), Matt Jones (castle face), peanut butter wolf (stones throw) to name a few, are all people with a business mind and their heads screwed on enough to want to make a sustainable model out of releasing music. A lot of ‘DIY’ heads seem to want to call you out for wanting your shit to do well. I’m in the business of trying to lose as little cash as possible whilst releasing music I know I’d want to buy and watch if I had nothing to do with it.

What logistics and planning went into creating the label?

Charlie: I was very lucky in having Matt Jones from castle face and Alex Ives from first terrace (plus ex-mvps) offer endless advice on how to start up a label. Other than that I just saved up a lot of money to get the first pressing and merch pressed up for mvps! Covid happened though. I’m still £3,900 in the home for that one and owe The band guys £400 each.

Did your time with your band Thee MVPs affect how you’d run the label?

Charlie: I don’t know really. I think it was a good band to start the label with. I think the amount of doors mvps opened and connections it made certainly helped me setup the network and give me the confidence to start this. I know my work ethos has carried over into it for sure but I’m certainly not interested in being a ‘garage rock guy that releases garage rock records’.

Did you have an idea of what bands you wanted to sign on the label or genre you would work with?

Charlie: There’s no real remit really. BringIng the ruckus and giving a shit is half the battle. I can only do so much in a year so if I turn something down the chances are that I physically can’t do it more than a taste thing. I would love to release some amazing hip hop as much as I’d love to do a proper good grindcore album.

I’m certainly not interested in being a ‘garage rock guy that releases garage rock records’.

Do you feel the internet has it made it easier/more viable for Eeasy Records to operate?

Charlie: Yeah, for sure. If I had it my way I wouldn’t bother with any sites or channels but it’s stupid to think like that in these times. I mean emailing or DMing someone is infinitely more convenient and fast than cold calling Or writing a letter isn’t it? By that same token though things can get saturated. I think we’re developing a good usp. My grand plan is to have it be a place where even If you don’t know the band the chances are you’ll be happy you rolled the dice and won on our newest LP.

The Shakamoto Investigation just dropped their LP with Eeasy, how has the response been so far?

Charlie: Really good actually. I released mvps in may last year when everything was still completely on its head. Now the dust has settled abit and people are more chill with the idea gigs aren’t happening for a while it’s totally encouraged people to make these orders rather than wait for the next gig. I’ve already had a few people say eeasy has helped them out this year and really if I/the bands can do something to brighten up someone’s day during this weirdo time then that can only be a good thing. By the way please order one. These guys rule.

Check out The Shakamoto Investigation here:

Do you feel more artists want to be signed to a DIY label?

Charlie: I can’t rightly answer that. Mvps worked on their own terms so much I haven’t had conversations like this in a long time. Bands just wanna have people giving a shit about them. That’s a fact of life. Doesn’t make them crap or poser. I know I’d rather be just recording and gigging rather than painting houses! People just want to feel like they belong to something and that’s ok.

What does Eeasy Records do to help artists and how do you work with them?

Charlie: Well it’s a still a new thing. I funnel all the money into the next release so I generally try to keep money allocated for things like pressing/mastering/artwork/weird merch etc.

We also don’t take royalties. I just work out a  cut if we get a good media placement. The bands wrote the music and I’m not pretending I played cowbell on it for a slice of that pie. We’re all too small fry to fuck each other over. Stick together everyone!

Do you approach artists or do they approach you?

Charlie: Again, we’re just starting out so I can’t answer that with any kind of historical context. I know that I wanted to put out Shakamoto after twenty Minutes of the first gig I saw. It reminded me of all the risk taking 80s hardcore and punks were doing + it was the first time I properly excited by a scrappy bullshit basement venue band in like 8 years. They rule. Yorkshire have a minutemen.

Why do you feel there are so many DIY scenes popping up?

Charlie: Because people are bored with radio 6 playlists telling them what’s hip. Despite what this pandemic has done people still bloody love thinking for themselves.

What makes a good DIY scene and how does a DIY label fit into that?

Charlie: I’m not so sure. People like fuzzkill in Glasgow,acid box in Brighton and static shock & upset the rhythm in London. I’m incapable of rattling off people I think do stand out work. But that’s an objective answer to a very subjective question. I feel if you’re trying to set shit up then you’re on the good fight.

Lastly, what advice do you have for DIY artists and those looking to start their own label?

Charlie: Save your money up! Be prepared for delays! Have fun with it! Only work with what you dig!