Billboard has announced their new Social 50 chart. Serving as a complement to Billboard’s existing weekly rankings, the Social 50 chart will tally artists’ popularity using a formula blending weekly additions of friends/fans/followers along with weekly artist page views and weekly song plays on MySpace, YouTube, Facebook, Twitter and iLike. Data from these sites is gathered and provided to Billboard by social music tracking service Next Big Sound.

“We continue to adapt the way we chart the changing landscape of music,” says Billboard editorial director, Bill Werde. “The Social 50 is yet another step in the evolution of Billboard and an important response to our changing times.”

Bill, you should have launch the Social 50 chart at least 2 years ago. Billboard is behind the times and simply too scared to adapt and seems like the old method of charting music is becoming pointless and outdated. 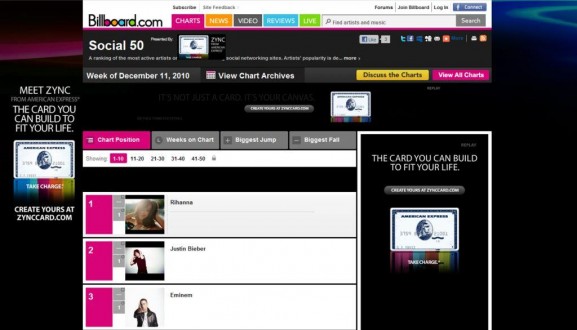 Podcasts and podcast clips are coming to Facebook next week

According to an email from Facebook, podcasts will start making their way onto the social platform next week.

‘Soundtrack My Life’ is a project from Porsche that creates custom music on the fly based on how you drive.

You say: “seems like the old method of charting music is becoming pointless and outdated”

Do you have any basis whatsoever behind this claim?

Same goes with your assertion that Billboard’s “behind the times” and “simply too scared to adapt”. How so?

On another note, I like how Billboard’s editorial director is named Bill. Bill from Billboard.

With regards to charting of music, this is just my own opinion. I am also a huge fan of Bill from Billboard!

Facebook, Myspace, Last.fm, etc. have had critical mass for the past 2 years at the very least. Thus, they should have started charting these activities at that time. Plus, they havent even acknowledged the existance of Wearehunted, Hype Machine, SoundCloud and other great service, which have large numbers of the general public listening to music on their sites on a daily basis, this also needs to be charted.

If the top 5 are anything to go by, the majors spent those 2 years establishing their presence on MySpace and YouTube (NewsCorp and Google). SoundCloud would probably be too indie.

But at least you can chart with just a YouTube channel…