Borrtex thought there was a mistake in his stats but one Spotify playlist shot his streams up to near a million with one track.

As streaming services become the one place we go to for music, playlists are becoming the new albums in their power and influence. 18 year old producer and composer Borrtex (Daniel Bordovský) from Prague, who uses RouteNote to get his music on the top music stores and services, has experienced what a playlist can do first hand after being selected for Spotify’s massive Sleep playlist with 2.2 million followers, one of Spotify’s own hand-curated playlists.

In that moment his music was suddenly put in front of an audience of 2.2 million new potential listeners. Borrtex said: “I first thought it was some kind of mistake! I didn’t get any notification until the second day, so I thought there was something wrong with the numbers in the Spotify for Artists app. But the next day, when I got an official email from Spotify saying my track was added to one of the biggest playlists out there, I realised it’s real!”

When we asked what it was like seeing his track in one of Spotify’s biggest playlists, Borrtex said: “I remember being super happy about the news! It’s like you are working on something for a year and then the moment of exposure is here and you know that the hard work finally does payoff!”

Before his recent track We Are Saved was added to Sleep Borrtex was steadily building an audience with consistent releases of amazing production that have been featured in over 1000 projects including documentaries and short films. But being put in front of millions of new listeners is an exciting new step, earning hundreds of thousands of streams every week since being added. You can see below just how impressive the track’s growth was after joining the playlist. 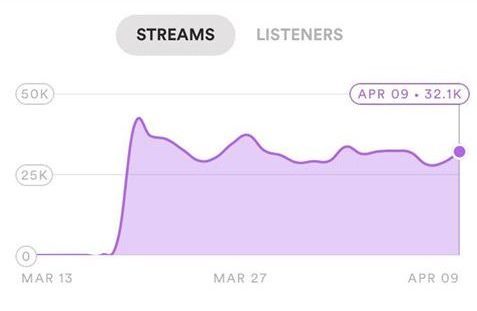 We spoke to Borrtex a bit more about his music and the journey to where he is today as things look to start rocketing forward for his music.

How did you start making music?

I started early in May of 2017 when I arrived from Los Angeles. Me and my friend had an amazing opportunity to speak to a few of the best worldwide known film composers there. We visited the studio of Danny Elfman and James Newton Howard. Later on we also were invited to have lunch with James, so it was truly inspiring to see how these great film composers work on a professional basis.

At that time, I was a film maker. I was focused more on doing documentaries, and we were invited to LA to shoot a short documentary about working in Hollywood. But when I got back home I thought more about doing music as I have a musical background from my childhood; I used to play the piano as a kid. And one day I simply decided I want to try to write my own melody and things went quite well, so later that month, I ended up releasing my first EP with 3 tracks.

What are the inspirations that have shaped you and your music?

As I mentioned, my biggest inspiration to start writing my own music was James Newton Howard. Without his generosity and kindness to show us his studio, I’m not sure if I was here now as a composer. I remember being very fascinated not so much by the music but more by his personality and by the way he can express part of himself in the music he composes.

When it comes to other artists who inspire me, it’s definitely Hans Zimmer who I got to meet in June 2017. It was like a dream coming true. Me meeting the most popular film composer in the world? I couldn’t believe it! I also think the big part that brought me to film music is also my deep interest in movies themselves. Since I was 15 years old, I just loved watching films and TV series.

What is it that you love about music and making it?

The best thing about making music is the freedom I get as an artist. My creative process is just the way I want it to be, I can go out and get some inspiration from nature, or I can stay at home and just improvise. I can adjust it by my own needs and I can fully express myself along with my feelings and ideas. And that’s what I really love about it! Also, playing the piano is simply the one activity when I get completely lost in the moment and forget what time it is.

I can do it for hours a day and I’m still having fun while writing new tunes. The goal I have with my instrumental music is to help people bring the emotion to their lives. Sometimes you don’t feel like singing, so there is my music to support you, it’s here to make the perfect emotional background for your situation. I heard from some of my fans that my music helps them to stay calm and relaxed or that it just helps them focus better while studying. And reading all those messages gives me a reason to never stop composing.

What are your plans for the future?

After the graduation, I hope to finally have more time to compose. I’m not sure what exactly will happen, but you definitely can expect me to release a new album along with a few singles and maybe also EP by the end of this year. I also have some film scoring projects coming, so I will be working on my first feature film where it will be me who takes care about the music!

What advice would you give to other up-and-coming artists?

This is a great question! I think the biggest and most important piece of advice is to work hard and be patient. If you work on yourself every day, you get better with every track you release, and if you are patient enough to not stop producing, then I can promise you, good things are on its way.

At the beginning the problem is, you don’t get the exposure you deserve; nobody knows you. But as you are developing your skills and you have a decent social media presence then things change. Yes you do start with small numbers but if you persist, then it starts raising and in a moment, before you realise it, you have hundreds of thousands of streams!

So, believe in yourself, be good in communication (with fans but also with people who inspire you) and be patient, don’t give up.

Making music since childhood and honing his talents, Alson is now being picked up by some of the biggest electronic music channels on YouTube. Alson recently spoke to me about how life is going for…

Mathew Daniel is the current VP of International at Netease Cloud Music. Mathew has had a very strong music background, especially in China. Mathew was recently interviewed at Midem about the Chinese Music Market and…