“An app to capture your song ideas. Whenever inspiration strikes.”

Apple has surprised everyone with the launch of a new recording app and an update to their popular mobile version of GarageBand. The update brings some great improvements and new features to the app and Music Memos gives you an entirely new and easy-to-use platform to record your ideas with.

Music Memos is an app that resembles Apple’s built-in Voice Memos app with some extra, flashy features in the vein of GarageBand. However Music Memos promises high-quality, uncompressed audio, all through the use of the built-in microphone of your iPhone. You do have the option to connect an external microphone however it’s not necessary to create a clear recording. Music Memos has been optimised for the recording of acoustic guitar and piano but works well with other instruments too, including voice.

The most unique and exciting feature of Music Memos however is the ability to add and tweak a backing band, that follows your lead when playing. The app automatically analyses the essentials of your recording and then suggests which chords you played on a track. You can then play it back, adding a virtual drummer and bass player to jam along with you. The app will even track the tempo of your playing and will adjust it’s speed in real time, even if you change speeds during the track. As you listen you can fine tune the playing by switching between different types of drums and bass’ and tweaking the energy or style of playing. 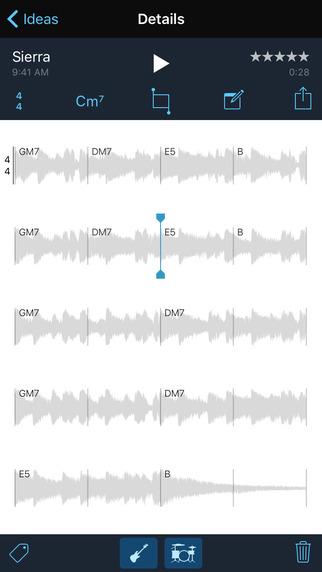 What if you record something using Music Memos that you really love? Easily add it into GarageBand on your iOS or Mac and even into Logic Pro X. You can also share them between friends and devices by adding them to your iTunes library, Apple Music Connect, SoundCloud and Youtube – all directly from the app.

On top of it’s impressive recording functions Music Memos also features an instrument tuner and, of course, a list of your past recordings where you can rename your tracks, add star ratings and add tags, for example Apple suggest adding tags like Intro, Verse, Bridge etc. So when recording a song you can make sure every part is perfect. 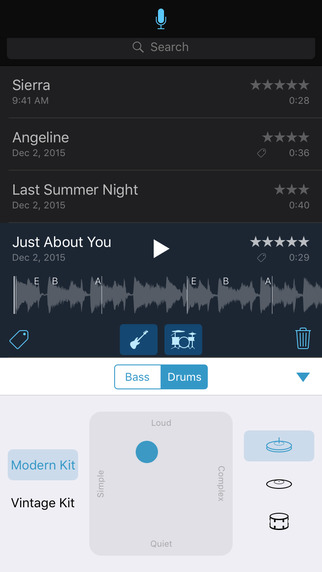 Do you want to know what is potentially the greatest thing about Apple’s new Music Memos app? It’s completely free! You can download the app now from the Apple App Store on compatible Apple devices here: itunes.apple.com/app/music-memos/id1036437162?mt=8&v0=www-us-ios-musicmemos-app-musicmemos

Also watch T-Pain try out the new GarageBand update, courtesy of The Verge: