Computers are getting better and better at making music and soon the top songs in the charts could have little to no human involvement – at least that’s what Popgun AI are hoping.

Artificial Intelligence is getting more sophisticated by the minute and it’s capabilities are beginning to know no bounds. Some see it as a threat, some see it as a blessing, and most of us just think it’s pretty cool. Popgun are the developers behind an AI that can intelligently create sophisticated music using algorithms and it could threaten pop music songwriters around the globe.

The Australian startup has come a long way since it started developing ‘Alice’ last January. Alice was their first music playing AI and ‘she’ was capable of listening to notes played by a human on a piano and then responding with an algorithmic based progression from the human notes. By the end of the year Alice had come on leaps and bounds becoming a sophisticated piano player in ‘her’ own right. By the start of this year Popgun had developed AI that could play drums and bass, capable of analysing rhythms and grooves like a real drum or bass player. Watch their evolution from the conception of Alice in the video below:

Now we’re nearing the end of 2018 and Popgun’s AI is essentially capable of creating full songs by itself and if you heard them on the radio you wouldn’t bat an eyelid. The AI is even capable of producing and chopping vocals to fit the vibe of tracks it’s creating to a scarily good standard. Their AI is now capable of creating a full backing track based on human vocals that it’s given.

Things are looking good for the company as their technology gets more sophisticated than many people thought possible. Their rapid enhancements this year have been aided by seed funding from Silicon Valley in February as well as big name endorsements, including Pandora’s CEO Tim Westergren joining their board recently.

Popgun co-founder Stephen Phillips is optimistic for the future of their AI in the use of popular music but doesn’t see it as replacing human involvement. He says: “It’s going to be a new instrument that producers will use. A tool: a more abstracted drum machine. It can play the guitar, the bass and the piano, and each one of those AIs can listen to one another and play together. That’s very new.”

Speaking on why it won’t replace humans, Phillips says: “It doesn’t have taste. It has no conception of culture. It sees a whole lote of music, and from that it can model the distribution about how to play that instrument. It has lots of concept about key and timing and phrasing, but no concept of ‘good’ and ‘bad’. Humans are integral to that. That bit’s not in the AI: it has to be done by humans.”

In an interview with Music Ally Phillips re-iterates fairly often that he doesn’t see this as a danger to creativity or the profession of musicians. Jazz musicians are accordingly definitely still safe as the AI struggles to understand or reciprocate the frenetic and manic style of playing inherent to jazz. But when it comes to pop music, the formula has been there long before Popgun’s AI, it’s just a matter of using it. 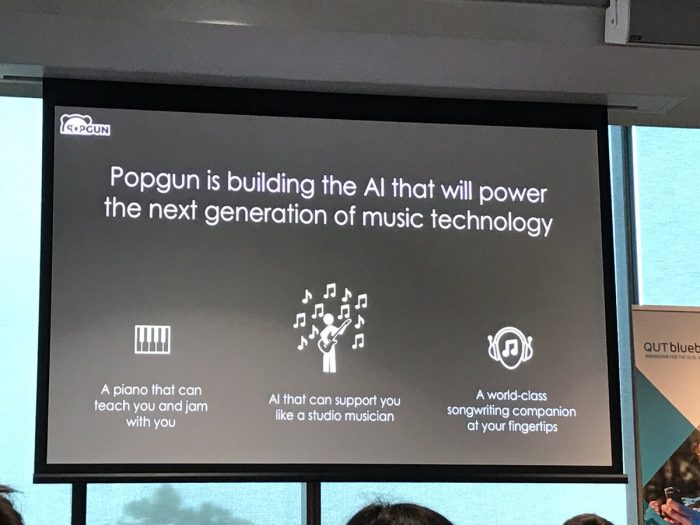 Phillips says: “We will have pop hits! Well, either us or someone like us will build software that every producer on the planet is using. When we show this to producers, they’re like ‘I need this!’. Press a button and something creative comes out. It moves them being the sole source of creativity to being the curator of this experience.”

But being the source of creativity is part of the art, no? Does pressing a button to make “something creative come out” not infringe upon the entire concept of creativity? Sure, the ability for a computer to faithfully create a high quality song that wouldn’t stand out in the charts is impressive – but is it necessary, even as a production aid? It seems like it’s just taking more responsibility away from producers to learn and hone their craft. And when it’s hard enough to make it in the industry as it is, perhaps this tool isn’t what we need.

But what do you think? Let us know how you feel about the increasingly sophisticated capabilities of AI in music in the comments section.

Get a sneak peek at Spotify’s voice controlled mini gadget

Spotify’s ‘Car Thing’ is their first piece of hardware to come out and we finally know a bit more about the funny little device. Last year Spotify announced their very first physical device, the enticingly…

Last year’s GRAMMY’s CEO says that the award show is rigged calling out one artist in particular. The GRAMMY’s awards ceremony is under fire with a bunch of allegations at the moment – the latest…