Tubular, leaders in video analytics, have secured another $10 million in funding bringing their total to $31 million in the 3 years they’ve been operating.

Tubular Labs measure online video performance across multiple platforms to reveal which platforms have the most users, what businesses and channels are dominating the industry and more. With their new boost in funding Tubular plan to improve their analytics across social media, like Facebook who have been introducing video content for the past year.

Founder and CEO of Tubular, Rob Gabel said: “Our goal since the beginning has been to help brands and publishers grow their online audiences. Today with more than 55,000 publishers generating over 99 billion monthly video views, online video has reached critical scale. What’s missing is monetisation of branded content. We’re thrilled to partner with Marker and will use this new funding to expand our offerings, enabling publishers to effectively prospect, pitch and report on branded content.” 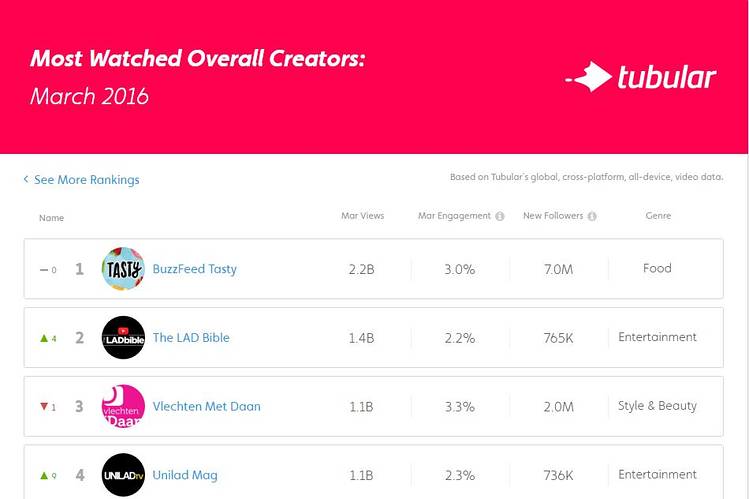 Marker LLC led this round of Tubular’s funding as well as their Series B funding 2 years ago. Marker co-founder and partner, Rick Scanlon said: “Tubular is a pioneer and the clear market leader in a rapidly growing, increasingly diverse and critical online video industry. Over the last three years, the company developed a solution that tracks more than 2 billion videos across 30 social platforms, its customers base has grown by more than 10 times and it is now considered the standard in cross-platform video intelligence.”

That customer base included 4,000 online creators and 100 businesses. Among those businesses are BuzzFeed, who Tubular reported were far in the lead for video views in April with 4.7 billion views. As comparison, in second place was Time Warner with 2.2 billion views in April.

At the end of April Tubular launched Video Ratings so that brands and creators could track their video content and ratings across the web. At the time, Gabel said: “We know that the online video industry today captures just 12% of the potential $6.3b cross-platform branded content opportunity. Tubular Video Ratings will help unlock the other 88% by enabling our customers to more effectively measure their online video success.”