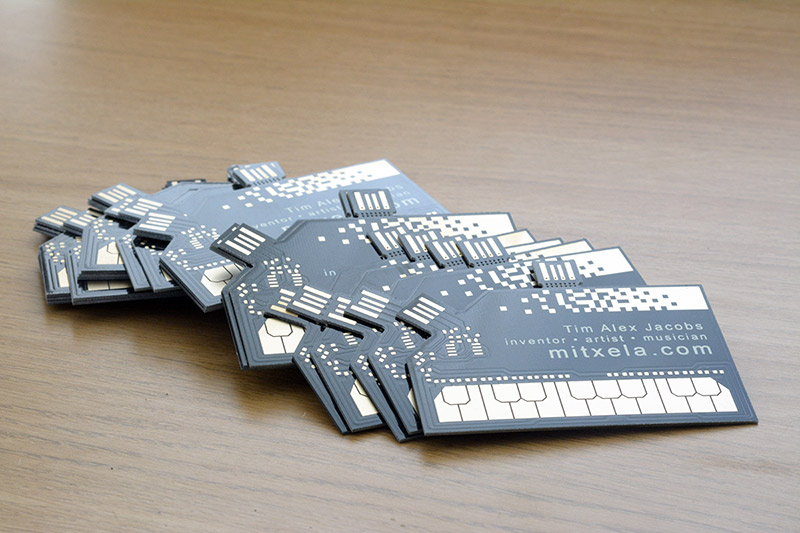 Patrick Bateman thought he was jealous of an Eggshell business card, wait until he sees these business cards acting as a MIDI instrument.

Business cards are made to sell yourself or your services, and people try to make theirs unique to draw in interest. Some opt for making them as classy as possible, some try to make them look funky, and some cards are designed to be played with and none more than these MIDI business cards.

Tim Alex Jacobs is the man behind the MIDI-stylophone business card which is made up of a printed circuit board that can be used as a MIDI instrument. Now the technology is cheap enough and capable a variety of electronic business cards have been made but Jacobs says with his: “A couple of years ago I took a stab at making one for myself, but I didn’t want it to be pointless.”

Jacobs doesn’t remember how the idea for creating a MIDI-stylophone came to his head but the idea resonated with him and he set about making it reality. The card has a miniature keyboard allowing you to play it as an instrument and can be read using an analog-to-digital converter with a resistor ladder along the keyboard. Jacobs used this method so that it wouldn’t require anything larger than an ATtiny85 for the full range of 20 notes.

The cards are cheap enough to make that, if your selective with who you hand them out to they won’t drain your funds. Jacobs says they ended up costing roughly $3 each. It was made with a snappable section which can be re-soldered onto the USB corner making it thick enough to stick into the USB without having to make the entire business card bulky.

Jacobs’ final design with an immersion gold finish to sex it up a bit looks amazing beyond the fact it’s such a unique card. It’s sure to make any potential customers or partners look at you twice and at the very least they’re going to have some fun with it.

You can find out more about how he did it here: mitxela.com/projects/stylocard