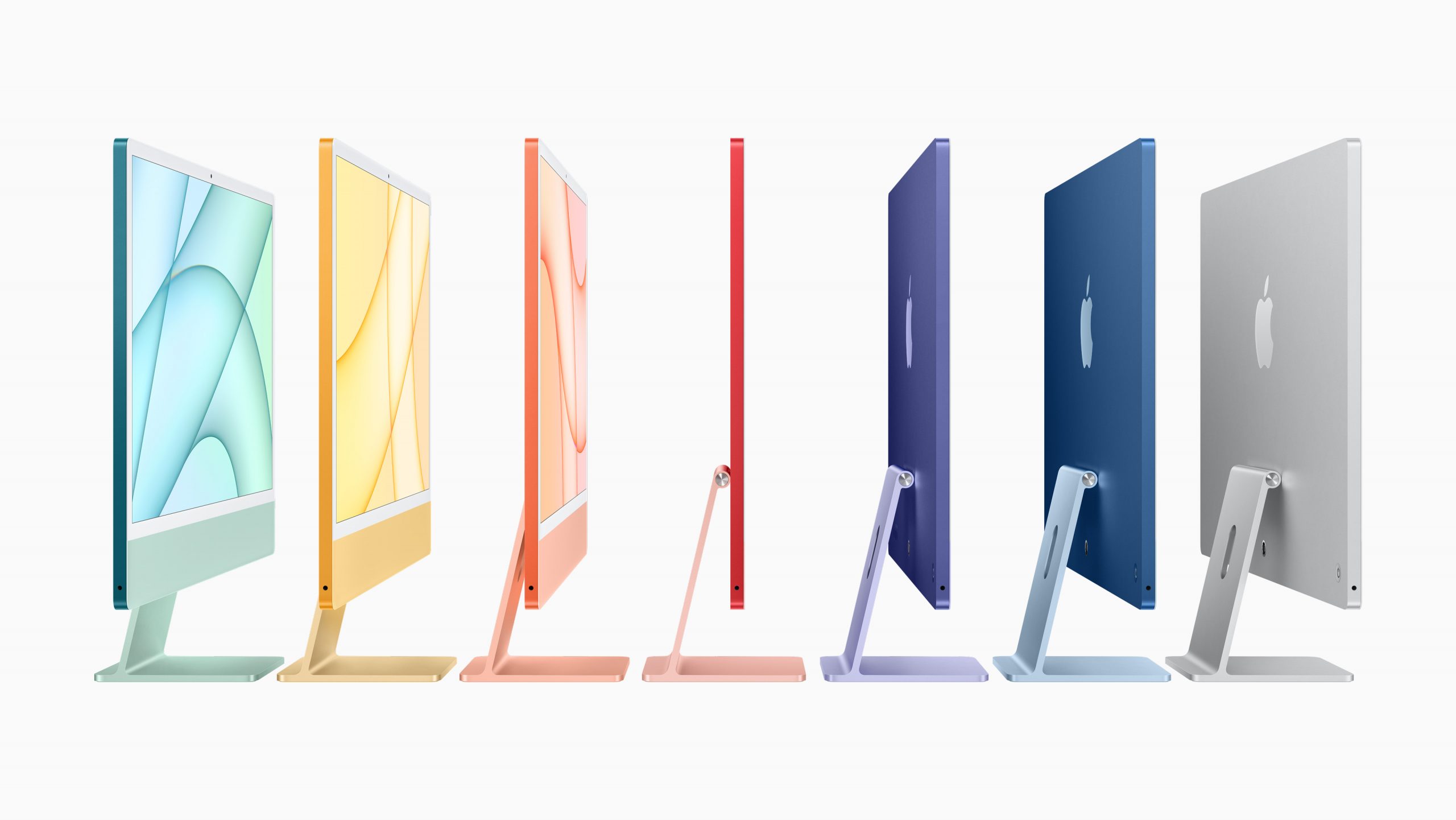 Apple took to the virtual stage yesterday to announce their redesigned iMac, all-new AirTags, and changes to the iPad Pro, Apple TV 4K and iPhone 12. Find the full stream from Apple here.

Apple’s all-in-one desktop computer got a much needed redesign. While iMacs have been receiving fairly regular spec bumps over the years, the exterior design has remained largly unchanged since 2012. The new iMac is just 11.5mm thin, weighs 10 pounds and comes in seven new colours: Blue, Green, Pink, Silver, Yellow, Orange and Purple.

Apple were able to drastically cut down on the thickness of the iMac thanks to the M1 chip. This is the same chip that was introduced in November on the MacBook Air, MacBook Pro and Mac mini. The compact system on a chip combines the processor, graphics, memory and more onto a single chip. M1 features an 8-core CPU, with 4 performance cores and 4 efficiency cores, 7 or 8-core GPU, 16-core Neural Engine, and either 8GB or 16GB of RAM. M1 has received high praise due to its power and efficiency on both applications written specially for the new architecture and older apps under Rosetta translation. Now that M1 has been around for a few months, plenty of apps have been updated to run natively on M1. Apple say the new iMac has 85% faster CPU performance and 2x faster graphics performance than the 21.5-inch iMac.

In place of the 21-inch 4K display is a larger 24-inch 4.5K display with P3 wide colour gamut, 500 nits of brights, anti-reflective coating and True Tone technology. Despite the display size increase, the physical footprint of the new iMac is only slightly larger thanks to reduced bezels.

Apple have also made improvements to the camera, microphones and speakers. The 1080p FaceTime HD camera is a welcome upgrade, now also with a larger sensor featuring advanced image signal processing thanks to the M1 chip. Your voice should come through clearer on calls too, with three “studio-quality” microphones, plus beamforming technology to focus in on your voice only. The 24-inch iMac now has a six-speaker sound system with “room-filling” audio from two pairs of force-cancelling woofers, balanced by a tweeter for each pair. The new iMac supports spatial audio on videos with Dolby Atmos.

I/O and accessories vary based on which iMac you opt for. All new iMacs come with a magnetic power connector on the end of a colour-matching woven cable, as well as a colour-matched keyboard, mouse and trackpad. The new Magic Keyboard now comes with keys for Spotlight, Dictation, Do Not Disturb and emoji. On the higher end models or as a configurable extra, the Magic Keyboard with Touch ID makes unlocking your computer, using Apple Pay and downloading apps as easy as a touch. All new iMacs are available with either a Magic Mouse or Magic Trackpad.

All models come with 8GB of memory, but are configurable to 16GB, probably for an extra $200. Although we don’t know the exact pricing of all upgrades, it seem the $1499 model is worth the extra $200 cash. All options are available with a built-in VESA Mount Adapter.

Pre-orders start on April 30, with availability in the second half of May.