The debate on music piracy is a bit like that on global warming; vocal and vehement, and extremely polarised (pardon the pun). Evidence can be produced to support the most extreme opinions, and is wrangled over until those in the middle don’t know what is believable. Consensus seems to be that even though music pirates are active music fans, and likely to be buying music as well as ‘stealing’ it online , piracy is damaging to sales of actual music tracks, although this may be slightly offset by increased gig attendance and other types of premium content purchase – box sets, t-shirts etc.

It also seems to be accepted that legal methods of ad supported, free-to-the-consumer streaming is the best way of combating the rise of piracy – the great user experience that Spotify has been able to offer has seen it expand faster than it can deal with; attracting users to use a great free streaming service isn’t hard, but finding a way of profiting from all those users is, balancing ad revenue against streaming and licensing costs, and Spotify’s launch in the States has had to be delayed while they evolve their model, and figure out how to move people onto their £10 a month premium service. 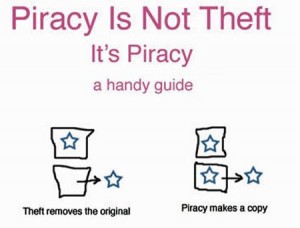 While they figure this out, MOG is stepping up to the plate in the States with their £5 a month subscription only model, that allows playlisting and file searching in a pretty similar way to Spotify’s interface [see the video at the bottom of this post]. A poll conducted by Demos (a company that sends people out with clipboards) suggests that revenue (income and adoption) would be maximised at the £5 price point: 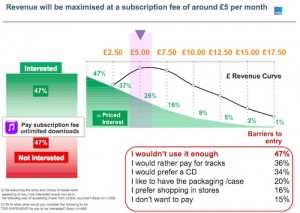 But this doesn’t account for the costs inherent in delivering the amount of music that people tend to consume through such streaming services; leaving the computer streaming music all day, an individual could incur a lot of charges for their service provider.

So which footpath of digital development is going to turn out to be the music superhighway of the future? In my humble opinion, it’s going to come down to user experience: if we discount piracy as a viable future for the industry (no revenue means no artists) then we’re left with paying per track, either for streams or downloads, or for a month on month subscription service. These will remain as competing options, probably with iTunes still in pole position of the download market, given it’s current market dominance, and the relentless success of the iPod and it’s cousin the iPhone, and for the rest it’ll come down to whoever provides the slinkiest, most versatile service for whatever the music industry decides is the rock bottom price per stream, plus the minimum streaming cost. I for one hope that the big 4 accept thatad-supported music streaming is the best and only real way of putting an end to piracy, that they come to terms with the smaller license fee and infrastructure that will be demanded by this model. Of the options currently available, I think that Spotify has the most user friendly platform, I’m proud that we’re working with them, and I suggest that you upload your music to their service, via RouteNote’s digital music distribution platform right…. Now.