For the first time ever, last year music streaming was the biggest earner of the entire music industry making up over half of all recorded music profits.

The latest report from the Recording Industry Association of America (RIAA) reveals that streaming music revenues made up 51% of the overall earnings in 2016. The massive success of music streaming also led to a giant 11% rise in the total revenue, the most growth in the music industry since 1998.

RIAA Chairman and CEO, Cary Sherman was positive about the news but also quick to point out the issues in the current music industry that needs resolving, saying: “A year of growth in the U.S. music business is welcome news. It suggests that years of patiently nurturing a nascent streaming marketplace has begun to pay off. But it does not erase 15 years of declines, or continuing uncertainty about the future.”

Sherman goes on to say: “The unfortunate reality is that we have achieved this modest success in spite of our current music licensing and copyright laws, not because of them. For example, it makes no sense that it takes a thousand on-demand streams of a song for creators to earn $1 on YouTube, while services like Apple and Spotify pay creators $7 or more for those same streams. Why does this happen? Because a platform like YouTube wrongly exploits legal loopholes to pay creators at rates well below the true value of music while other digital services – including many new and small innovators – cannot.” 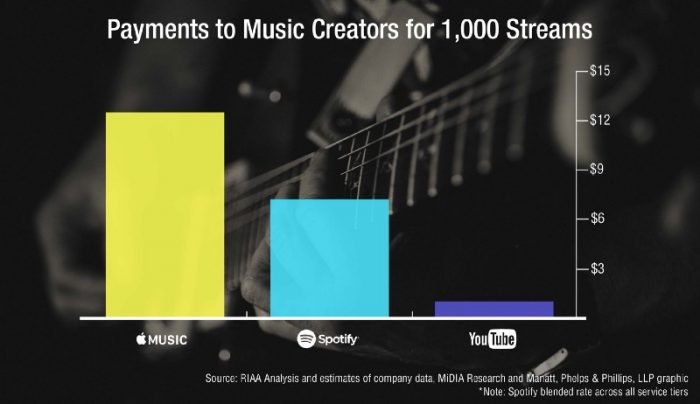 This year will see major discussion over streaming royalties, with the standard rates being set later this year by the Copyright Royalty Board. Many songwriters and organisations stepped up to make their voice heard as the first discussion was held in court earlier in March, as the rate set by the board later this year will be the industry standard for the next 5 years.