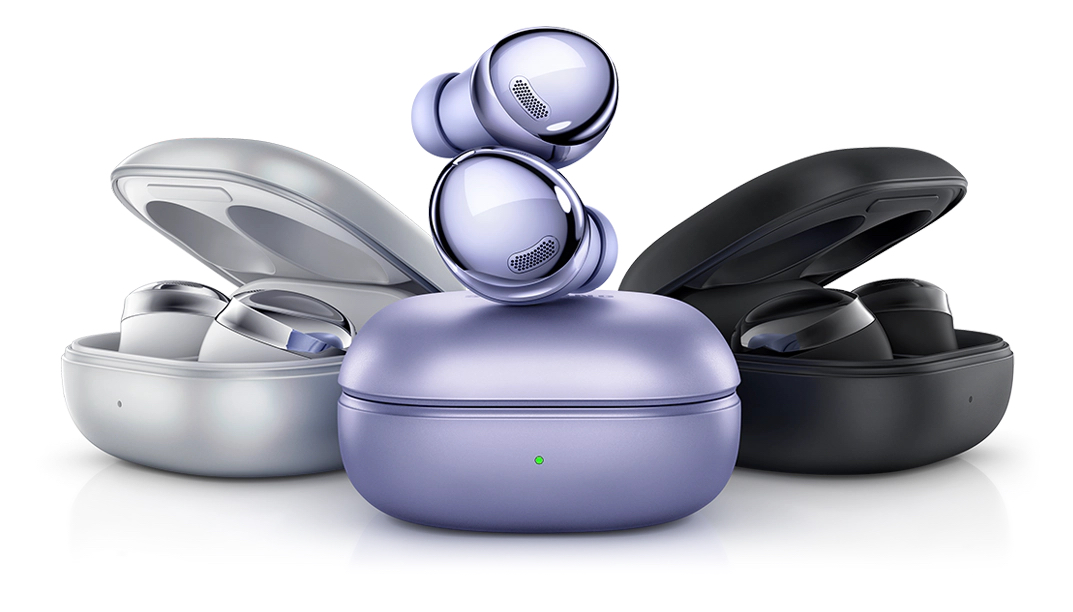 Rather than replacing any older models, the new Buds Pro will sit alongside the existing models. Launching in February last year with the Galaxy S20, the Buds+ were a fantastic in-ear pair that’s major flaw was the lack of ANC. Launching in August last year with the Galaxy Note 20, the Buds Live offered ANC but in a new open-design that spilled through a significant amount of background noise. The in-ear Buds Pro slightly tweak the design of Buds+ while adding active noise cancellation and some other AirPods Pro-like smart features.

With help from AKG, the new Buds Pro claim to “deliver powerful studio sound and crystal-clear call quality.” The Buds Pro improve upon the speaker design from the Buds+ and Buds Live with a 2-way speaker design that produces balanced sound and a wide frequency response. A larger 11mm woofer gives full bass without being overpowering, along with a 6.5mm tweeter with low distortion for silky treble, clean sound and a wide soundstage.

The design is a revision of last year’s Bud+, with a more rounded glossy exterior. The inner side pressed against your ear is a soft matte material, with three ear-tip sizes for a comfortable and secure fit. An air vent on the outside balances pressure to reduce occlusion. IPX7 water resistance goes above the IPX4 offer by much of the competition, with protection against 3 feet of water for 30 minutes, which is plenty good enought for heavy rain and sweat.

Intelligent Active Noise Cancellation is said to block out 99% of outside noise at 118.43Hz. Four levels of Ambient Mode allows you to tune in or out of loud environments. Voice Detect will instantly switch from ANC to Ambient when the buds hear your voice for more natural sounding conversations.

As well as helping with active noise cancellation, three built-in microphones with beamforming performance are sure to pick up your voice loud and clear for calls and the voice assistant, while reducing wind noise via the mic mesh and chamber. Calls can be answered with your voice alone. Bluetooth 5.0 offers a steady connection to all smartphones and computers. Touch controls can skip songs, launch music, answer calls and more, with customisation available in the app.

The Galaxy Buds Pro have a number of features exclusively available on Samsung Galaxy phones/tablets. 360 Audio is a new feature offered by Buds Pro. Similar to spacial audio introduced on the AirPods Pro and AirPods Max last year, 360 Audio uses Dolby Head Tracking technology to motion-track the wearers head to deliver a fixed surround sound experience for movies and TV shows. Again borrowing features from AirPods, Auto Switch instantly shifts to the device you’re using such as away from a tablet while watching a movie to your phone to answer a call. 360 Audio and Auto Switch are only available on devices running Android One UI version 3.1 or later, essentially locking it to newer Samsung phones and tablets. With no multi-point Bluetooth, users of non-Galaxy devices will be out of luck for quick switching. Samsung’s voice assistant Bixby is always on standby waiting for the command “Hi Bixby” to wake up. Bixby can do all the usual smart assistant things such as weather reports, make phone calls, send messages, search for music, control your TV, order a coffee, as well as device specific things such as asking how much battery is remaining on the buds, switching devices or switching ANC/Ambient mode. The SmartThings Find app on Galaxy devices running Android 8 or later will help you find your buds by playing a beep. Offline finding shows the last location your buds were used. The final Galaxy exclusive feature is Buds Together, allowing you to share the sound from your Galaxy device running One UI 2.5 or later.

With ANC and Bixby wake-up on, Galaxy Buds Pro will last 4.5 hours on a single charge, with 16 hours in the case. These numbers increase to a very impressive 8 hours and 28 hours respectively with both features turned off. Fast charging will sort you out with an additional hour from just five minutes in the case. The compact case can wirelessly charge or be hooked up via USB-C.

$199.99 is a fantastic price for Galaxy device owners that will be able to make use of the exclusive smart features such as 360 Audio, Auto Switch, Bixby, SmartThings Find and Buds Together. For other Android and iOS users, the Buds Pro are about as good as you’ll get for $200, only slightly getting beaten by more expensive AirPods Pro in the ANC department and Bose QuietComfort Earbuds in sound quality.

The new Samsung Galaxy Buds Pro are available to order today, with the buds and case coming in three of the same colours as the new S21 and S21+: Phantom Black, Phantom Silver and Phantom Violet. Unfortunately there’s no Phantom Pink, Gold, Red, Titanium, Navy or Brown as on the new phones.

The introduction of these buds has further pushed the prices of last year’s models down. Galaxy Buds+ can be found for just $109.99 and Buds Live are available for $133. For more of the competition, find out best true wireless earbuds at every price point here. Or if you’re after something a bit bigger, check out our best wireless headphones here.