EA Mobile have launched a watered down version of Rock Band for the iPhone. 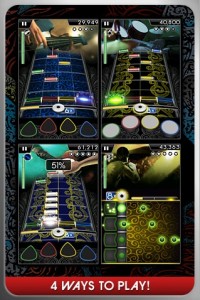 All the instruments are simulated with the touch screen of course, including the Vocals! (yes, you just tap like a guitar) RockBand comes with a Bluetooth fueled multi-player option for simultaneous slamming. The game has been released with a $9.99 price tag which seems pretty steep for, although its a full RockBband game, is still basically an app. The 20 song play list does include some familiar songs with Lynyrd Skynyrd, Smashing Pumpkins and Joan Jett and the Blackhearts among others, with more available as downloads.

RockBand may have beaten its rival Guitar Hero to the iPhone only to bump into the mini-game brick wall that it Tapulous’ tap-tap revenge. But with more “buttons” it does prove more challenging than the established TTR 3 which should increase its shelf life a bit. But fans of Tap-Tap revenge fans will be quick to point out it is available for just $1 and does have a similar in-app track buying feature. The Playlist in full is.