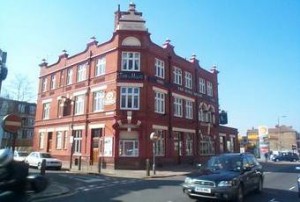 As the established venues are finding it harder to make ends meet, and we look over the precipice of the Ticketmaster/Live Nation merger, anticipating the big splash that will be made in the mainstream live music market it’s nice to have little bits of good news, like the government’s relaxation of the music licensing laws, and now the rescue of one of South London’s stalwart little music venues. The back room of the Half Moon pub above Putney embankment has staged thousands of new, eclectic, and independent bands over the years, and would have been lost if the pub had been developed, as threatened, into a Slug and Lettuce, Pitcher and Piano type gastro pub. This may mean nothing to you if you’re living outside London, so just read it as a small triumph for little venues and little bands. Remember that little venue you used to go to when you started going to gigs? The one that was a bit scruffy, but did a good pint and put on the wierd bands you wouldn’t have seen anywhere else? Image how you’d feel if that shut down, and give the Half Moon a little internal cheer… If you’re in the London area it’s another place you might be able to get a gig, and that’s got to be a good thing, right?

After an exhaustive campaign and overwhelming support from the public, we are absolutely delighted to announce that we’ve averted the scheduled closure on 31st January! The Brewery have reconsidered and we are now focussed on getting back to work promoting this wonderful music venue that we love so much. We could not have achieved this without the wonderful response from the public – to those who came down to the pub to show their support, signed the petition, left their comments on our forum, joined our Facebook group and to the bands and artists who didn’t hesitate at short notice to come and perform to save the Moon – THANK YOU!!!